You may not have noticed that you got an extra Christmas “present” this year — as the latest episode of Monster Kid Radio dropped on Christmas Eve/Day.  (This week, despite what the header says!)

In it, host Derek M. Koch and I discuss a TV show we both love — The Sixth Sense, a 1972 network offering starring Gary Collins.  (No, this is not the movie with Bruce Willis!)

Some of you may recognize the show from its greatly truncated appearances on Rod Serling’s Night Gallery — in fact, that’s where Derek first saw it.  But if that’s your only exposure, you’ve missed a treat.  The syndication package with NG cut out more than half of the show’s content.

Thanks to the wonders of the internet — and a French DVD set — Derek and I have now seen this gem in a way it hasn’t been shown on broadcast TV since it originally aired in 1972.  And naturally, we want to share our love with you!

So, click this link to go to MKR and listen to the show, or download it on your favorite podcatcher.

Remember, you can support this and all my other work, including Frost Harrow, Dr. Cushing’s Chamber of Horrors, and more, by joining my Patreon for a buck or two a month.  Thanks! 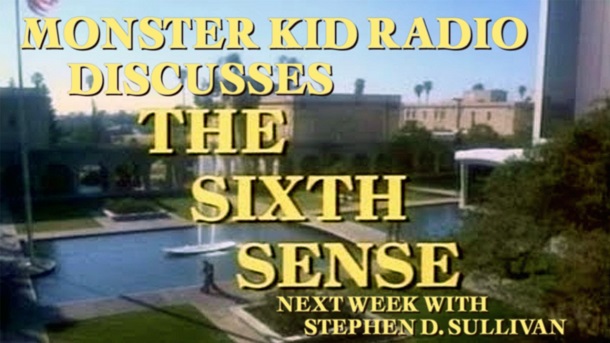 What do Muse and Dungeons & Dragons have in common?

March 27, 2010 Steve Sullivan Appearances, Fantasy, Friends, Games Comments Off on What do Muse and Dungeons & Dragons have in common?

Within the span of a week, my life took some strange twists and turns.  I had some fun, spent time with friends and family, and — by happenstance – lost my job.  The last was […]

It seems like only yesterday that I was writing about Monster Kid Radio here… And because I had a part in show #500, and used that opportunity to catch up on some shows I hadn’t […]