Frost Harrow is a series of modern Gothic horror novels set in the town of Frosthaven, Wisconsin, on the shore of Lake Superior.

The stories feature the struggles of Ivy Frost, Grant Winslow, and their friends and families against the weird forces of the supernatural.  Complicating matters are the machinations of Ivy’s relatives, the strange and sinister Frost family, de-facto rulers of the Frosthaven since its founding.  The Frosts’ generations-old feud with the Winslows puts the budding romance between Ivy and Grant in peril.   But such family squabbles pale beside the vampires, werewolves, witches, and demons now plaguing the city.  Can true love survive such perils?  Can anyone?

Frost Harrow is designed with modern readers in mind and is perfect for reading on Kindle and other e-book devices.  The stories are fast paced with plenty of horror and adult-oriented romance and action.  The books are fairly short, designed for a week or so of easy reading, not the lifetime some 1000-page epics require!  And, though each Frost Harrow book is designed to stand on its own (for the most part), arcs of books and arcs of plots and subplots within the series will reward ongoing readership.   Fans of the work of Stephen King and Dark Shadows will surely enjoy this exciting new series!

You can catch the latest Frost Harrow news by clicking here, which will take you to the blog entries area of the site (found in the banner directly below the Stephen D. Sullivan logo).

Support my stories! Click www.PaySteve.com & throw me a buck or two!

Click here to read the serialized version of FROST HARROW Book 2 – Die with Me. 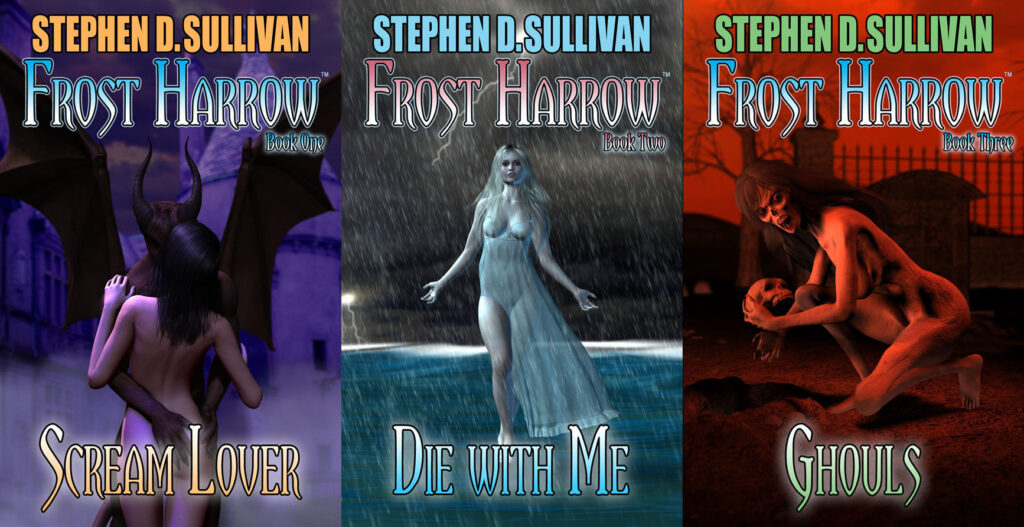