Hey, folks… It’s been my honor and my pleasure to be on Derek M. Koch’s MONSTER KID RADIO a number of times this year.  But I haven’t been so great about publicizing those appearances.

So, here’s a link to our discussion of Universal’s classic THE WOLF MAN.

Note that you can subscribe to the MKR podcast through iTunes and other pod-catcher services.  It’s a great show (even when I’m not on it.)

And I’ll try to drop in some links to other recent MKR shows I’ve done below, when I can dig out the episode numbers. 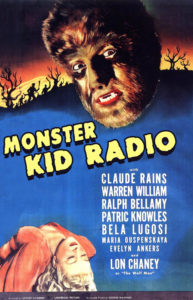 So, life got complicated for all of us with the pandemic sneaking out of China and places far away and into the US at the end of February and the start of March, 2020.  But […]

This book’s been in the works for a years, and is finally available to the public! UNCANNY ENCOUNTERS – LIVE! is a collection of short plays and playlets by me and my buddy, fellow award-winning Monster […]

Daikaiju Attack – About the Story I