My friend Christine is an expert on Lizzie Borden.  (She had to become one to write her new novel, Lizzie Borden, Zombie Hunter!)  So, since her book is being released on September 13, 2016, I thought I’d turn my site over to her for a special post.  Oh!  You should all rush out and buy the book!  I’ve read some of it in pre-releaze, but I’ve already ordered my copy and can’t wait to find out how the whole thing turns out!  Now, take it away, Christine! — SDS

Comment (with email to Christine) or go to her blog, http://girlzombieauthors.blogspot.com  and enter the giveaway to possibly win 1 of 10 Kindle copies of Lizzie Borden, Zombie Hunter.
Email is required for entry. Contest ends 9/14.

This is another stop on the release blog tour for Lizzie Borden, Zombie Hunter. 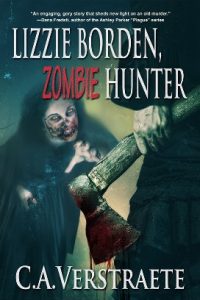 Thanks, Stephen, for letting me take up some of your blog space!

As Steve is a huge movie buff (ask him how many movies he has!), I figured it was a natural to talk about the Lizzie Borden movies.

As little is known about Lizzie personally, except for the newspaper reports and a few letters that have filtered down through history (and most of that being in the rumor and innuendo department), that gap has provided writers and film makers with a fertile ground for their imaginations.

Surprisingly, not many films have been made about Lizzie — at least mainstream movies, not counting underground, low-budget movies. Most interesting is the one main film that probably has had the biggest effect on what we think of Lizzie. 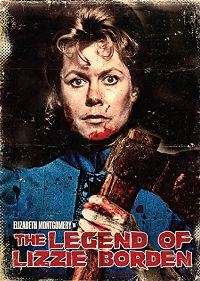 Elizabeth Montgomery (TV’s Bewitched) was the first to give us the notion of a murderous nude Lizzie in the 1975 film, The Legend of Lizzie Borden. The film, which was rather shocking at the time, shows a partially undressed Lizzie standing over her father with the hatchet. The idea did come down in history, however, and I believe was one of the “ridiculous” suggestions offered at the trial. ( Sorry, I can’t find my source at the moment.)

Interestingly, the movie won a 1976 Edgar award for Best Television Feature or Miniseries, won Primetime Emmys for film editing and costume design, and was nominated for a Golden Globe for Best Picture Made for Television in 1976.

Most recently, Lizzie Borden was given a more sinister, serial killer, horror persona when played by Christina Ricci in the TV movie, Lizzie Borden Took An Axe (2014), The film starts with a rather jarring rock music background that makes you wonder how that fits into the time period. The follow-up mini-series provides a better experience and story overall. 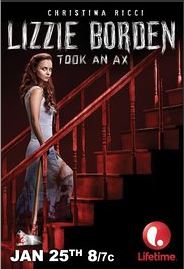 The story is continued in the eight-episode Lifetime series, The Lizzie Borden Chronicles (2015).  Ricci was nominated for a Screen Actors Guild Award in 2016 for outstanding performance by a female actor.

I enjoyed all these presentations. I remember thinking, when I first watched the Elizabeth Montgomery movie, that this was an entirely different role for Montgomery. Watching it again recently, it was interesting to see how she portrayed Lizzie as seemingly guileless, yet secretive.

In contrast, Christina played Lizzie more cunning, her evil bubbling just beneath the surface. She was sly, evil, and cruel, but a lady with a smile. Just don’t cross her. The series was much bloodier, as well.

… I’m intrigued to know if Steve saw either movie and what he thought?

(Steve Notes: I’ve seen the Montgomery, but will have to seek out the Ricci!) 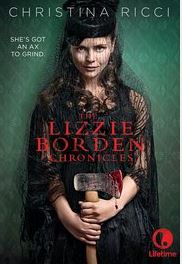 Your Turn: If you saw both movies, who do you think played Lizzie better or which did you prefer?

…In keeping with the films, here are a few paragraphs of “my” Lizzie from chapter 1 of Lizzie Borden, Zombie Hunter:

Lizzie reeled back, her panic growing as her spine pressed against the fireplace. She pushed and fought in an attempt to keep this monster away, yet Mrs. Borden’s ugly face and snapping teeth edged closer and closer.

Then Lizzie spotted it: the worn hatchet Father had left behind after he’d last brought in the newly chopped wood. No, no! Her mind filled with  horror,  but  when  her  stepmother  came  at  her  again,  Lizzie whispered a prayer for forgiveness and grabbed the handle. She lifted the hatchet high overhead and swung as hard as she could. It hit her stepmother’s skull with a sickening thud.

As impossible as it seemed, Mrs. Borden snarled and continued her attack.

Every family has its secrets…

One hot August morning in 1892, Lizzie Borden picked up an axe and murdered her father and stepmother. Newspapers claim she did it for the oldest of reasons: family conflicts, jealousy and greed. But what if her parents were already dead? What if Lizzie slaughtered them because they’d become zombies?

Thrust into a horrific world where the walking dead are part of a shocking conspiracy to infect not only Fall River, Massachusetts, but also the world beyond, Lizzie battles to protect her sister, Emma, and her hometown from nightmarish ghouls and the evil forces controlling them.

Follow the blog tour and be sure to get your copy of Lizzie Borden, Zombie Hunter in print and Kindle Sept. 13!

Yes, there is a contest to win 1 of 10 Kindle copies (ends 9/14.).
Entrants MUST enter an email as a blog comment or on the rafflecopter
to be sent a gift copy, if they win.
Sorry, no time to hunt you down. No email, no chance to win.
And please, review it on Goodreads and Amazon.

Think you know Lizzie Borden? Read on! The blog tour schedule is:

This isn’t the end! Get your copy. Share a review. And come back to the GirlZombieAuthors blog or the author’s website for info on another blog tour starting Sept. 26 with Bewitching Book Tours.

You probably all know by now that besides writing monster stories, and watching monster movies, one of my favorite things to do is to talk about monsters and monster movies.  And there’s no better place to […]

IN THIS EPISODE: …Our werewolf (in human form) meets the twins and discovers his destiny… (Just a reminder that my Patreon subscribers at $2 and above get all stories in PDF format in advance!) Welcome to […]