I woke up this morning to a world without Vince Rotolo — and I feel immensely poorer for it.

The worst part is that Vince, pioneering podcaster, Monster Kid Supreme, and good friend to many of us (even some who only knew him through his work), is gone.  The other worst part is knowing what this must be like for his wonderful wife and co-host Mary, and (because of distance) not being able to do as much as we’d wish to provide comfort and help.  Mary, know that we love both of you, and all our thoughts and prayers are with you.

I got the dreadful news in a call early yesterday (Wednesday) evening from friend and fellow podcaster Derek M. Koch, who had heard moments before from Vince’s friend and co-host Nic Brown.  I was devastated.  So was Derek.  We both still are.  During that call, neither of us could believe it — and part of me still can’t.  And I probably won’t for a good long while.

Then came the third worst thing that day (which pales behind the first two, but…), which was not being able to tell anyone else while Mary and Nic (and I assume others) tried to contact Vince’s other friends and relatives — especially those in abed in the UK.  (Because finding out a close friend has died via social media is pretty awful.)  So, for a long time yesterday evening, those of us who knew could only commiserate with a small group who we knew had already gotten the bad news.  Eventually, though, a family friend posted condolences online and the news leaked out.

Which was something of a relief, because then the community grieving could begin.

Now the B-Movie Cast extended family either knows or is finding out, and well-deserved tributes to Vince and remembrances of him are pouring in.

This is another one.

I just wish he was here to enjoy them, and I hope that some of them may bring comfort to Mary, when she feels strong enough to get online and read them. 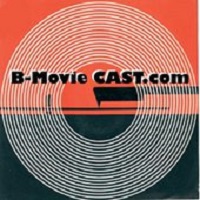 I don’t remember exactly when I started to listen to the B-Movie Cast, but I do remember what my first show was — #5, The Creature from the Black Lagoon — and I know why it was my first show: I was sick and tired of snobbish podcasts.

I’d discovered podcasting after getting iTunes and, shortly thereafter, my first (and only, so far) iPod.  Listening to people talk about movies was one of the first things I did with this new technology.  (If you’ve seen my massive film collection, you understand.)

Anyway, I’d found a well-produced movie podcast and was enjoying them talking about current films, but after a while I noticed that they were very snobbish when it came to genre flicks (a problem which later caused me to dump that “pro-cast” altogether).  Upset about that, I searched for shows that might actually like monster movies.  That’s when I stumbled across the podcast that would change my life — Vince’s B-Movie Cast.

As I said, my first show was the Creature from the Black Lagoon, and I liked it — though it seemed rough around the edges  — so I tried a few more.  I liked those, too, and quickly jumped to getting the current ‘cast every week.  And as the rough edges smoothed out, the show just kept growing on me.  I don’t remember how long ago that was now, but it seems like ages; it seems like I’ve always been a member of the B-Movie Cast “family.”

And that’s what we’ve become, a family. 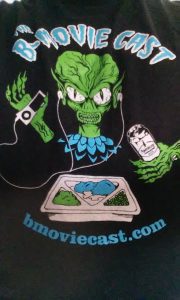 Because not long after I started listening, I wrote the ‘cast a “thank you” note.  And to my surprise, they read it on the air, which was fun.

So I did it again.  And again.  And every time I did, they read it, and soon it was like we were having a conversation every week, and that slid into calling in pretty much every week, and the “Hi, Steve!  Hi, Mary!” thing started, and somewhere in there I started doing guest appearances on the show.

Don’t ask me when, because it seems like forever.

Oh, and we started the book giveaway, which began because I thought it would be fun if they had (more) prizes to give away every week.  I only stopped after I’d given away 200 or more books and the giveaway started to feel more like a chore than a joy.   Because joy is one of the main things the B-Movie Cast has been about — the joy of sharing what you love with other people who love, it too.

Vince was the ringleader of that delight — delight in movies that most people thought were “stupid” or “cheesy,” delight in collecting films and records and books and toys and pretty much anything that has to do with monsters.

He was the Peter Pan of B-Movies, enjoying each one as though he were still a kid, a joy that many of us shared.  He was our gleeful ever-young leader, flying from one overlooked film to another, and we were his Lost Boys & Girls.

And now, with Vince gone, we’re all just feeling… Lost.

It will take a while to get over that.

But we still have our memories.  And we still have Mary and Nic and Juan and all the cast of regulars.  And maybe someday there will be more shows.  Though maybe there won’t, and even if there are, it’ll never be the same.

The great thing, though, is we still have all those old shows — and there are a lot of them: 374, if I recall correctly, from the earliest crudely produced one-hoster to the later “no edits” extravaganzas.  That’s enough B-Movie Casts to listen to one a day for more than a year!

And some of them are nearly 3 hours long — which means there’s a whole lot of Vince to listen to and re-discover.

It might even be more hours of Vince than there are of Dark Shadows, which I realized yesterday my friend would never get to finish watching — at least not in this lifetime.

But lots of us are still watching Dark Shadows more than 40 years after it went off the air.

And I like to think that people will be doing the same with Vince’s podcasts as well.  That the ‘case has made our friend immortal.

Because the B-Movie Cast and its homespun fireside-chat charm wasn’t just fun, it was also important.

Dozens of podcasters, including sometimes guest on the show Derek M. Koch, were inspired to do what they do by Vince and the B-Movie Cast.  And thousands of people have found new movies to love because of the show and its hosts.

And I even changed the course of my career as a writer because of Vince and the gang.

Interacting with the B-Movie family and being on the show made me realize that Monster Kids are My People — and I’d rather write cool monster stories for a small group of like-minded folks than spend my time chasing down high-profile movie adaptations or lucrative work-for-hire jobs.

And thus,I wrote White Zombie, and Daikaiju Attack, and Manos: The Hands of Fate, and Canoe Cops vs. the Mummy.  And it’s why I’ve started Dr. Cushing’s Chamber of Horrors, and… Well you get the point.

Vince changed the world for a lot of people.

And he changed it for the better.

And those of us who knew him, whether in person, through working with him, or just “over the air” will always love and remember him.

And, as the Doc said to Captain Adams in Forbidden Planet “That’s a good epitaph for any man.”

So, thank you my friend!  (And Mary and all the rest of the B-Movie Cast family, too!)

See you in that Big Movie Theater on the Other Side.

Save us some great seats.

B-Movie Cast & Me – Diary of a Madman – Vincent Price

Hey, all you podcast listeners and b-movie fans… I once again had the great and fun priviledge of joining Vince & Mary Rotolo and B-Movie Man Nic Brown on the B-Movie Cast. On their 199th […]

My friend Christine is an expert on Lizzie Borden.  (She had to become one to write her new novel, Lizzie Borden, Zombie Hunter!)  So, since her book is being released on September 13, 2016, I thought […]