I had a great time chatting with the Former Zombie-in-Chief from Mail Order Zombie, Derek M. Koch, on his new show Monster Kid Radio.  Given our backgrounds, I bet you’re not surprised that the topic of discussion this time was my brand-new book, White Zombie — a novelization of the classic motion picture.

The interview stretches over two shows, MRK #46 and MKR #47 and covers both the film and the novel.  We talk about the problems of adapting a well-known movie with iconic characters, recreating the film’s script, and all the ins and outs of turning a 70-year-old iconic motion picture into a compelling modern novel. 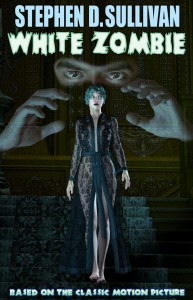 You can listen to Monster Kid Radio live online, or — better yet — you can subscribe to the show through iTunes or your other pod-catching software.  (That way, you’ll get to hear not only me, but also people like my friend Paul McComas, who appears in the show following the White Zombie shows.)

So, click here to listen to the first episode of my interview, MRK 46 — or click here to listen to the second episode, MKR 47.  And, if you totally get into pod-listening, you can catch Derek talking to Vince Rotolo and the B-Movie Cast gang about White Zombie by clicking here.
Of course, you can also click here to get White Zombie, the new novel, for all e-formats, or here to get the Special Edition — including recreated script — for all e-formats.
Kindle users can get White Zombie here and the Special Edition here.
And you can read my original White Zombie book announcement here.
Happy listening, and happy reading!
About Steve Sullivan 395 Articles
Stephen D. Sullivan is an award-winning author, artist, and editor. Since 1980, he has worked on a wide variety of properties, including well-known licenses and original work. Some of his best know projects include Dungeons & Dragons, Teenage Mutant Ninja Turtles, Dragonlance, Iron Man, Legend of the Five Rings, Speed Racer, the Tolkien RPG, Disney Afternoons, Star Wars, The Twilight Empire (Robinson's War), Uncanny Radio, Martian Knights, Tournament of Death, and The Blue Kingdoms (with his friend Jean Rabe).
Website

This is the ninth part of a serialized giant monster story published in weekly installments on this site. Tune in every week! Click here to read the first part.  Click here to see my new release Zombie Shark! […]

My friend Elaine Cunningham recently decided to put up a “work in progress” page at her site. That sounded like a great idea, but also sounded like another part of the site to update.  And […]