My novelization of the classic film White Zombie is out!  Just in time for Halloween!  I hinted about the book during a post this summer, but I didn’t want to let the cat out of the bag too early.  (Competition can be fierce among writers, and good ideas like this don’t come along every day.)  It’s a perfect gift for your Monster Kid friends — or  your Monster Kid self! 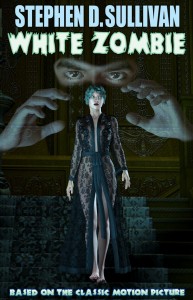 White Zombie, in case you’re not familiar with it, is a Poverty Row (low budget) horror production starring Bela Lugosi (to whom I’ve dedicated the novel).  It was filmed in 1932, but the movie has since slipped into the public domain.  You can watch it on YouTube here or watch and download it from Archive.org here.  And you should, because it’s a terrific horror film — a horror classic, in fact.  It’s also the first feature-length zombie film ever and contains the first utterance of the word “zombie” in a film.

Though Lugosi is the main attraction, White Zombie is wonderfully atmospheric and moody — features I’ve tried to play up in my adaptation.  I should point out that though the film is public domain, the book contains an all-new novelization by me.  And don’t worry, it’s written in a modern style, while still being faithful to the motion picture.  This is not a parody or spoof!

The book contains my “making of” notes, so that’s a treat for those of you into director’s commentary — or, in this case, writer’s commentary.  The Special Edition version of the book also contains the complete, recreated script from the movie — which makes an interesting comparison.  (You could also use it to stage your own version of WZ — if you get my permission, of course.)  Plus, the book contains a Foreword by Derek M. Koch, from Mail-Order Zombie and Monster Kid Radio!

A print version White Zombie will be forthcoming.

So, what are you waiting for?  Click the links below and BUY IT!

I’m writing about October and already it’s mid-November and Thanksgiving is almost upon us.  How can the year be going so quickly as the pandemic just seems to crawl on and on and on?  (Stay […]

This is the ninth part of a serialized giant monster story published in weekly installments on this site. Tune in every week! Click here to read the first part.  Click here to see my new release Zombie Shark! […]

Daikaiju Attack – About the Story III