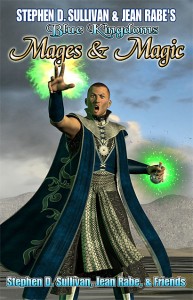 Here’s a look at the final Blue Kingdoms: Mages & Magic cover.  (At least, I hope it’s the final version!)  I’m really excited about it — and about the project nearly being finished, too!

M&M should be available, at least in e-book form, by the end of the year.  (And in print form almost simultaneously.)  Be sure to check here and follow my Twitter and Facebook accounts for further updates and release information.

If you want to see how this cover has progressed, you can check the previous posts here and here.

Drop me a note or comment if you want a Mages & Magic wallpaper! (Or have anything else to say.)

June 2018 was a pretty big month with 45 movies from start to finish.  This isn’t too surprising, as Ray Harryhausen’s Birthday (June 29) is there to pump up the total a bit.  It’s been […]

This is the third part of a serialized giant monster story published in weekly installments on this site. Tune in every week! Click here to read the first part. Click here to join the Daikaiju Attack […]