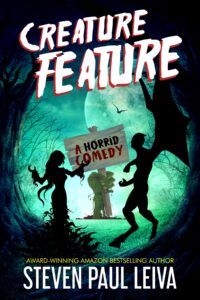 My friend Steven Paul Leiva has a new book coming out, and it’s right up my alley.  With a name like CREATURE FEATURE, maybe it’s in yours, too!  The eBook is coming out on September 21, but can be pre-ordered — or you can grab the print book — now!  Here’s a teaser…

Are there monsters and creatures in the deep, dark shadows? Or are they hiding in plain sight?

Check it out on #Amazon now: https://tinyurl.com/y5p94k3e

With all that happening, this seemed like a good time to sit down and ask Steven to introduce himself and the novel to y’all.  (ME = Stephen D. Sullivan, your faithful scribe.  STEVEN = Steven Paul Leiva.)

ME: Do you consider yourself a Monster Kid, and, if so, when did you become one?

STEVEN: I’m afraid not—I scare easy. Actually, my mother never let me watch monster movies when I was a kid. She was afraid I would have nightmares. I’m not quite sure she was as concerned for me, as she was in her getting an uninterrupted night’s sleep. In any case (a case for a psychiatrist, most likely), I was not inculcated with a love of creature features in my formative years. I wonder if someone can be inculcated by an incubus? But I guess that’s off-topic.

So I never even saw the original Frankenstein until well into my adult years. In fact, I think I saw Young Frankenstein before I saw Frankenstein. Since then, of course, I’ve seen all the great Universal horror films—including Howard the Duck.

ME: Yeah, that last one’s a shocker, all right.  What inspired you to write this book?

STEVEN: A simple question that occurred to me after a night of debauchery in a seraglio. That’s not true, of course, I just like typing those words. Actually, I was probably in the shower. Alone, I hasten to add rather sadly. I find many good ideas come to one during a nice hot shower. But when you are in there alone, what the hell else are you supposed to do? Anyway, the simple question was—where do really weird ideas come from? (besides a hot shower). I mean, monsters, and creatures of the night, and blood-suckers, and really angry giant lizard and or gorilla-like stompers of not-yet-paid-for cars, and big fat humongous insects that look down on people and say, “Gee, they look just like little bugs”? Not to mention demons from hell and zombies. So I won’t mention them. Especially zombies. I really hate zombies. Zombies got no reason to live! 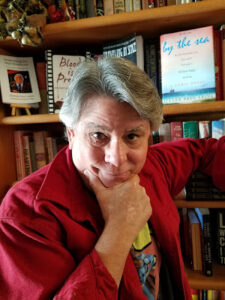 STEVEN: Frankenstein’s monster and Frankenstein. The creature because he’s not really a monster, is he? I mean, he didn’t ask to be born—or rather, assembled and stitched together. He’s just looking for love in all the wrong places. I mean, a village in the Bavarian Alps? How many good bars could there be there? Of course, his “father” abandoned him, so why wouldn’t he be dysfunctional when it comes to love? On top of that, people are always stopping him and asking him to jump-start their cars. It’s the bolts in the neck you see…

The film because it’s so oddly beautiful in design. And because Boris Karloff was a better actor than Colin Clive.

And because my mother did let me see one horror film when I was a kid, Abbott and Costello Meet Frankenstein. And, to be honest, it scared the shit out of me. I can’t remember if it gave me nightmares of not.

STEVEN: I’m afraid I can’t nail this one. I don’t think I’ve ever seen any Hammer films outside of the Quartermass films and their The Hound of the Baskervilles.  Films about arrogant geniuses, who some people would call monsters.

ME: Interesting.  There’s a lot of untapped if perhaps overly scary material for you there.  I’m a big  Hammer fan.  Final Question: What’s the most important thing you want people to know about this book?

STEVEN: If it gives you nightmares, I hope, at least, they are funny ones and you laugh in your sleep, and maybe even fall out of bed giggling.

ME: Thanks, Steven!  Good luck with the book!  It’s at the top of my reading list.

You can order CREATURE FEATURE on Amazon by clicking here!

Remember, you can support my writing and other work, including Frost Harrow, Dr. Cushing’s Chamber of Horrors, and more, by joining my Patreon for a buck or two a month.  Thanks!

Well, September zipped by very quickly, and October… Well, somehow, suddenly it’s nearly the end of the month, and I haven’t posted my September Reviews yet.  Weirdly, September started with a year title — 1999 […]

Film Mini-Reviews January 2018 – Charade to Get Out

IN THIS EPISODE: …Victoria is none too pleased with Vincent’s current dalliances.  How much longer will she put up with all this…? (Just a reminder that my Patreon subscribers at $2 and above get all […]