Agent Three and I waved as the bureau’s Cessna 180 Skywagon lifted off of the small landing strip in rural Pennsylvania where Agent Two had dropped us off.  I knew that “Ace” Freeman would have rather been piloting one of the bureau’s newly requisitioned Mustangs or Banshees, but three people getting here in either of those babies would have required serious overcrowding—not that I ever minded being shoulder-to-shoulder with Suzanne “Rocky” Rockford, one of the US Science Bureau’s most charming and capable agents.

“I hope you brought your hiking boots, Ray.”  She surveyed the surrounding hills.  “’Cause it looks like you’re gonna need them.”  It may have been early in October, but the trees were still green here in the north central part of the state, near the New York border.  The vista looked beautiful—if  tricky to navigate—in the early morning light.

I patted my duffel bag.  “Got ’em right here.  I always try to come prepared.”

“That’s one of the things I admire about you.”

A second-hand Jeep sat in the unmown grass near where we’d touched down, but Agent Three and I weren’t about to complain.  This assignment was too important to wait for our usual equipment.

I shook my head.  “No way to tell without actually seeing it.  Everybody’s been super jumpy since that fiasco at Roswell.”

“Mmm,” she agreed.  “And the Cold War isn’t helping.  You and Agent Two got closer to one of these things than anyone in the bureau.  Any ideas what they are?”

“Not a one.  That thing that knocked us flat could have been some kind of craft—or a weird form of ball lightning.”

I shrugged.  “Could be a real saucer, could be another balloon, could be some kind of Russian experiment or even a bomb.”

Rocky gripped the steering wheel tighter, her knuckles turning white.  “I hope it’s not that last, for all our sakes.  It could be something of ours, too.  That looks like a whole squadron of our boys blocking the road up ahead.”

I quickly counted three Jeeps and close to a dozen men in army drab behind a makeshift barricade.  I checked my compass and our map.  “See what you can find out from them, Rocky.  I’ll gear up and hike in from here.  It doesn’t look too far.”

“Check.  Then I’ll poke around and see what the locals have to say.  Good luck, Ray.”

“You too, Suzanne.  Give me a shout on the walkie if you need me.”

We parked near the barricade, and Three gave our bonafides to the sergeant in charge while I hiked into the wooded hills.

The wilderland north of Morris, Pennsylvania, isn’t the most rugged forest I’ve been in, but I felt happy that some army grunts must have blazed the way earlier that morning.  I followed the path they’d cleared through the brush until I spotted a figure moving through the woods ahead of me—a figure not dressed in standard-issue fatigues.

It didn’t take a backwoodsman to tell the intruder was a woman, dressed in tan slacks and a dark green blouse.  The yellow kerchief around her neck and her reddish-brown hair, glinting in the sunlight filtering through the trees, made her easy to pick out.

Bird watcher, I thought at first, which made sense given the camera bag over her shoulder and the binoculars she occasionally stopped to peer through.  As I drew closer, though—stealthily, just in case—my assessment changed.

“Tammy Rubens…?!  What in the hell are you doing out here?”

“Oh, hi, Raymond,” she replied, seemingly unsurprised by my sudden appearance.  She lowered her camera and flashed me a flirtatious smile.  “Trying to get a scoop.  What else?”

“Looking to catch yourself a big heap of trouble is more like it.  How’d you get past that army roadblock?”

“We reporters have our ways,” she told me with a wink.  “It didn’t stop you.  Why should it stop me?  Freedom of the press; you know?”

“Well, there are times and places where those freedoms can be abridged, and I’m pretty sure this is one of them.”

She frowned.  “Tell that to the First Amendment.”  She picked up her camera again and began snapping away.  It was a nice-looking newer model—the usual news photographer kind of thing—but with a long lens for distant shots.

I scowled.  “What are you taking pictures of?”

Annoyingly, she grinned and took one of me before offering her binoculars.  “See for yourself.”

I pointed the field glasses in the direction she was looking, and my mouth dropped open.  “I’ll be damned…!”

A quarter mile ahead lay… something.

It was disc shaped, seven to ten yards across and maybe half that high, though it was hard to be sure because of the intervening forest.  The thing’s pearlescent, faintly yellow-green exterior had no windows or doors that I could see.  No scorches or skid marks marred its smooth surface.  It must have come down hard, though, because the trees to the northeast of it had been shorn off or flattened by its passage.

The crash had done some damage to the saucer—or whatever it was—too, because a jagged horizontal crack at least two yards long and half a yard wide marred its upper fuselage.  The nose of the disc was hidden from view, probably embedded in the hillside, judging from the leafy earth heaved up around it.  The craft lay tilted at something like a thirty-degree angle.

Pale greenish vapor, maybe some kind of smoke, leaked from the damaged section, but I couldn’t smell anything above the musty scents of the autumn woodland.

“What do you think it is?” Tammy asked breathlessly.  “I mean, I know it looks like a flying saucer, but…”

“A new type of Russian weapon, maybe?”  I’d overheard the Teragons speculating that the Soviets would orbit an artificial satellite soon, if the US didn’t beat them to it, but surely this couldn’t be that.

Tammy flashed me a skeptical look and shook her head.  “The Russians don’t have anything like this.  At least, I hope they don’t.  Maybe it’s one of ours—some kind of experimental aircraft.  That’d explain the army getting all bent out of shape about it, blockading the roads and such.”

“They’d be interested in a real flying saucer, too.”

“Could be that’s why they’re poking around the thing.”

I hadn’t noticed until she mentioned it, but as the reporter spoke, a pair of army officers—a lieutenant and a captain, as best I could tell through her binoculars—emerged from the woods on the far side of the object and cautiously circled toward the crack.

“C’mon.  If they can take a closer look, we can, too.”  Without waiting for my agreement, Tammy ambled toward the crash site.

“Hey!” I called in a harsh whisper, but she didn’t stop.  I hurried along after, hoping she wouldn’t get us both shot before I could explain to the army boys who we were—or at least who I was.

The reporter’s hiking boots were as good as mine, but her camera and clumsy bag slowed her down enough that I soon caught up.  “You want to get killed?  This is a restricted area, and you’re not supposed to be here.”

“I’m with the USSB.  Downed aircraft, known or unknown, are right up our alley.  Get behind me and I’ll make nice with the authorities, but you’re gonna have to give me that camera.”

I reached for it, but Tammy yanked it away.  “Oh, no…!  You may be some high mucky-muck agent, but…”

We were still fifty yards from the crash site, but our little dispute (and Tammy’s yellow scarf) quickly drew the attention of the investigating army men.

“Halt!  Who goes there?!”  The lieutenant drew his pistol and pointed it at us.

Tammy and I put our hands up.  “I’m agent Ray from the US Science Bureau.  I’m fully authorized to investigate here.  If you’ll let me pull out my ID, I can prove it,”

The lieutenant looked skeptical.  “Do it slowly.”

I fished my ID badge from my pocket and held it out for them to see, cautiously walking forward; Tammy followed.

When I’d closed within ten yards, the captain nodded that we were okay, and all of us relaxed.

I took that moment to snatch Tammy’s camera.  She glared at me, but knew I could have her arrested if she made a fuss.

As the reporter and I exchanged poisonous glances, the captain pulled out a flashlight and stepped right up to the crack, as if to peer inside.  The object glowed slightly, and a faint hum filled the air.

For an instant, the world lit up pure white.  And when my eyes cleared, all four of us were lying flat on the ground.  The air smelled of ozone, and the saucer had vanished.

Tammy and I had to help the army boys hike back to the road; they’d been closer to the saucer—or whatever it was—than us.  Neither of them had any visible wounds, but they remained shell shocked the whole way.

Agent Three returned just as a medic finished checking over the army boys and their wits started returning.

“What happened, Ray?” she asked as she hopped out of the Jeep.  “You look like hell.”

“The thing went bang, just like that one at Green Point Air Base.”

“So not another balloon or a hoax?”

“Nope. And this time, we got pictures—courtesy of the news camera I confiscated from Tammy Rubens.”  I held up my prize and only then realized that, like the saucer, Tammy had disappeared during the confusion.

Three frowned.  “Is that who slipped into the woods as I drove up?  She looked exactly like someone I worked with in the war.”

“Sort of.  But she didn’t call herself Tammy Rubens back then.  Her name was Tanya Ruhoff, and she worked for the Russians.”

My slack-jawed response cannot be repeated.

Special thanks to Danielle Gelehrter (Penny Dreadful) for going above and beyond when we got jammed up on the deadline for this episode!  And thanks to Gwen Ruhoff for stepping up when we thought we might have to switch this month’s episode with next month’s!  Both of you are Super Atomic Awesome!

This is another key story in Atomic Tales, and another one I’ve been waiting a long time to tell.

Stories of crashed flying saucers are as old as Roswell, though I based this one on the Kecksburg Incident—at least a little—which didn’t happen until 1965, a decade after our stories.  (It seems likely to me that the “saucer” in that case was actually some kind of downed Soviet spacecraft or satellite.)

This tale continues AT’s UFO mythology, of course, but it also contains a big reveal, that I’ve been aching to write.

Did I surprise you?  Do you think you might know what’s going on in the bigger Strange Invaders arc?

Hopefully you’re intrigued enough to follow me even deeper into the proverbial rabbit hole.

This story and the ones that follow steer us solidly toward the second half of the Atomic Tales: Strange Invaders story arc.  The midpoint is rapidly approaching.

For those reasons and more, I had great fun writing this episode, and I hope you enjoyed it as well. 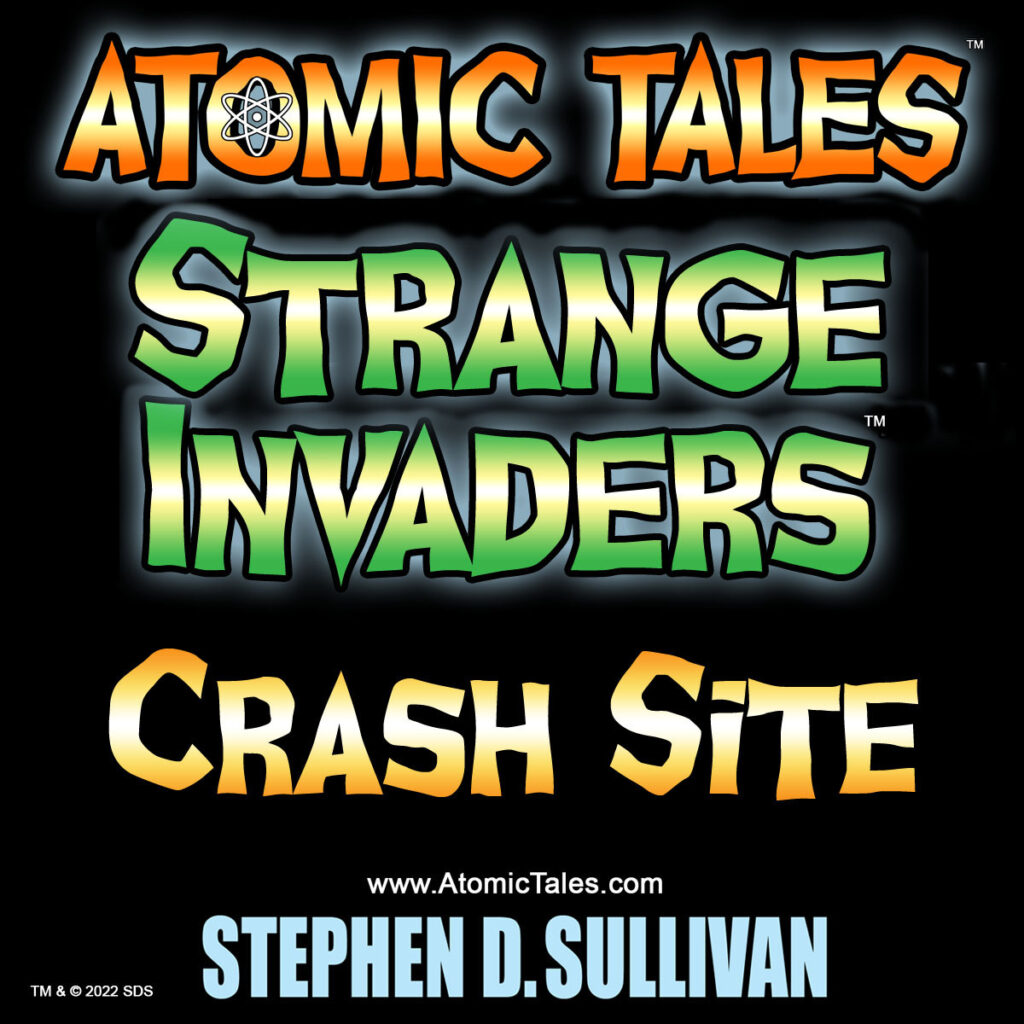 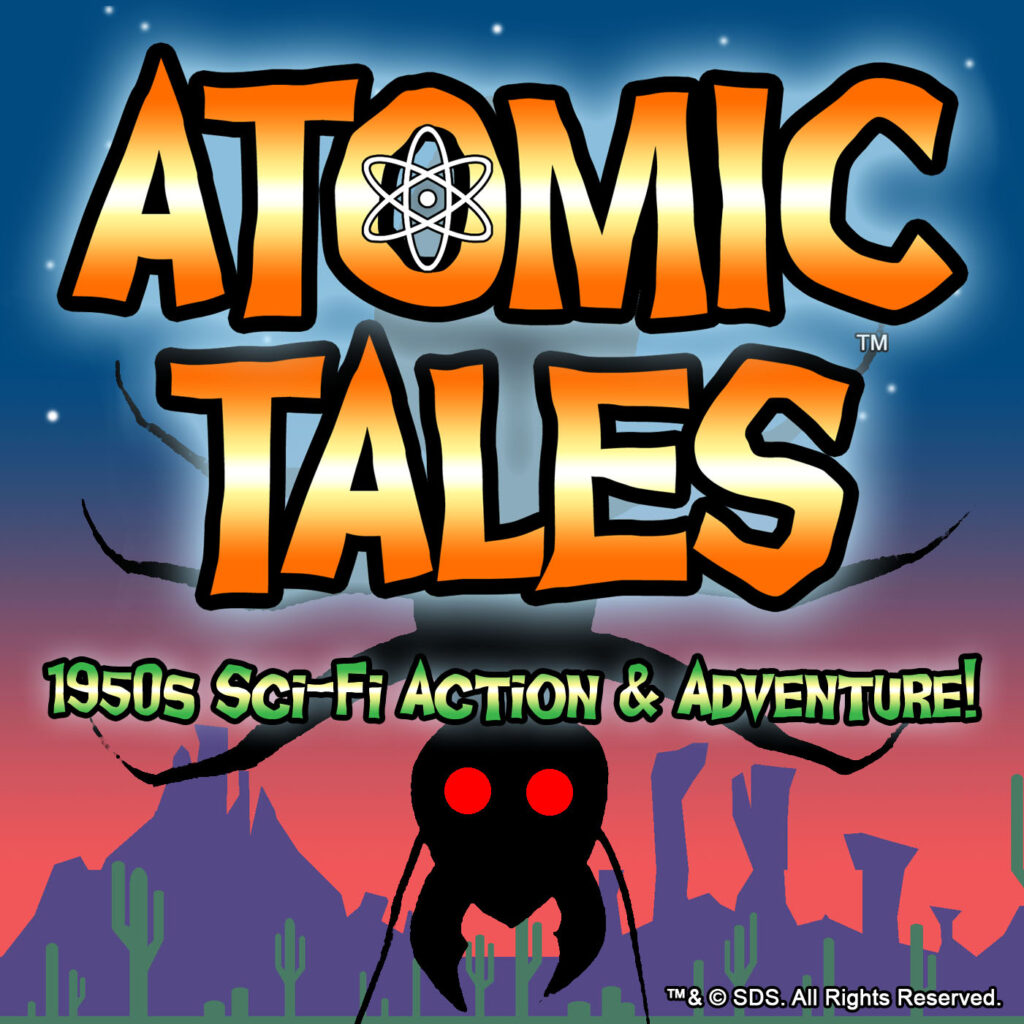 Yow!  How did I not get this posted in June?! Well, we had a very busy month, added Monster Bash in at the end, and then some more family drama (Haven’t we had enough?!) at […]

Featured on THE INFINITE BARD, Thrilling Adventures. ATOMIC TALES #2 – Ghost Town Gambit “I have to admit, this is one empty-looking town.” Agent Seven remarked as she gazed down the sandy streets of the […]