After a long stint, I’d been looking forward to enjoying a weekend off, but when the U.S. Science Bureau asks…

“We’re going back to Colorado,” she told me.  “Gigi’s got the car revved up to take us to the airport.”

“I’ll grab my stuff from my locker and meet you in the garage.”

Minutes later, the two of us were riding in the back of an agency car on our way to Andrews for a flight to Denver.

“Busy day,” agency secretary Gigi Brock, our driver, remarked.  “First a bunch of agents fly to Nebraska, and now you two are headed for Colorado.”

“Yeah,” Gigi replied.  “I dropped Three, Six, and Eight at the airport to investigate wreck of the train that was carrying Dr. Hedison’s body out here to DC.”

“What?!” I blurted.  I’d arranged that shipment after defeating Hedison in his mutated form as the Mansect.

“Agent Zero thought you and I deserved some time off after our run-in with that guy,” Agent Seven explained.  “How’s your shoulder?”

“You need to be more discreet while chauffeuring, if you ever want to be an agent.”

Half a day later, Agent Seven and I had driven our agency Studebaker from Denver to Hideaway Park, Colorado, a winter resort in the mountains.   Since it was still summer, the town’s outskirts looked deserted—lots of rolling terrain, evergreens, and big sky surrounded by the Rockies.  The sun was dipping toward the western peaks, and the air smelled of ponderosa pines and warm summer greenery.

“We’ve come all this way to talk to a guy about honey, Ruth?” I asked.

“Yep,” Agent Seven affirmed.  “Turned out that honey we found in Hedison’s lab had some kind of strange contamination similar to what Doc Teragon found in that giant ant nest your team explored.”

I shuddered at the memory.  “I guess stopping the Mansect wasn’t the end of the giant bug invasion.”

She shrugged.  “Still too early to tell.  Maybe we can get some info from this guy.”  Ruth pulled the Studebaker up to a hillside cabin with a hand-lettered sign declaring: Souvenirs, Maps, Snowshoe Rental, Best Local Honey!

The place looked more like a run-down private home than an actual business.  A rusting Ford pickup sat in front of an even rattier looking garage out back.  It seemed we weren’t the only customers, though; a well-maintained late model blue Chevy Bel Air sat in the wide gravel driveway-slash-parking area next to the building.

Ruth parked next to the Chevy, and we headed for the cabin’s front porch, which displayed the shack’s advertised wares in propped-up wooden boxes.

A man in overalls and a sleeveless white undershirt stood on the porch talking to a woman in a red blouse and maroon skirt.  Her pencil flew quickly across a pad of note paper.  The man clutched a jar of honey in his callused hand.

Both of them watched us as Seven and I approached.  Clearly, we weren’t from the area.

“That’s me,” Gordon replied, suspicious.  “Best honey in the Rocky Mountains.”  The pine scent from the nearby forest couldn’t cover the musk of his cheap aftershave.

“We’d like to talk to you about that honey,” I said.

Gordon grinned a gap-toothed smile.  “Must be a banner business day!” he proclaimed.  “Little miss here was just asking about that, too.”

The woman in red extended her hand.  “Tammy Rubens from the Denver Examiner: ‘We chase the news that you can use.’  And you are…?”

“I’m Agent Raymond, and this is Agent Ruth,” I said.

Gordon’s gray eyes narrowed.  “Not revenuers here to arrest me, are you?”

“Hideaway Hunny is very popular in Denver,” Miss Rubens explained.  “That’s the focus of my article.”  She smiled sweetly.  “But, if the government wants to talk to you, I better be going, Mr. Gordon.”

“You give me a good write up, won’t you, missy?” he reminded her.

“You bet,” Miss Rubens replied.  With a nod and a brief wave, she got in her Chevy and drove away.

“Now…” Gordon said, less friendly since the reporter had gone.  “What do you guv’ment types want?”

“We need to know where you’re getting your honey,” I replied.

“That’s a secret,” he said proudly, “industrial secret, you might say.”

Ruth put on her best steely-eyed killer face.  “There are no secrets from the U.S. Government.”

It took Ruth and me the better part of an hour to convince Gordon that we didn’t care about his illicit income but were, instead, concerned with contamination our scientists had discovered in his honey—contamination that might hurt people and get him sued.

Reluctantly, he got into his battered Ford and led us to his source, not a hidden set of woodland hives but, weirdly, to an old water tunnel in the mountains.  The three-yard-wide entrance was partially boarded over, but a small stream of clear liquid still ran from it into the ravine beyond, and alongside the water came something else: a golden trickle being funneled by a makeshift collection device into a two-gallon jug.

“There must be a hell of a big hive in that tunnel,” Seven, ever the scientist, noted.

“I discovered it a while back,” Gordon said proudly.  “It was just going to waste, so I figured… What the hell.  Remember, you said you wouldn’t tell.”

“Not if it’s safe,” I reminded him, poking around the hillside opening.  “Ruth, these boards are loose.”  The bottom cluster of planks swung up, almost like a doggy door.  “And can you hear that?”

Agent Seven nodded.  The buzzing echoing from inside the tunnel sounded almost like an approaching freight train.

“You don’t wanna go messing around in there,” Gordon warned.  “I had an old dog that went in when I discovered the honey.  He didn’t never come out.”

“Sorry,” I said, pulling out a flashlight.  I pushed the boards aside and peered in.  “It’s our job to investigate.”  Ruth crowded close, to get a look as well.

The dingy tunnel vanished into the mountainside.  But just at the edge of their reach, our flashlight beams shone upon something golden blocking most of the passage, a wall of six-sided cells…

Ruth and I dove for cover as a giant bee flew down the tunnel straight at the opening we’d made in the boards.

Whether he didn’t hear me or was too stunned to move, we’ll never know, because before he could hit the deck, the bee attacked.

This bug wasn’t as big as the giant ants plaguing the desert southwest, but its body was at least the size of a German shepherd, with a sting as long as my little finger.

Gordon screamed once and fell into the pine bracken, dead.

Seven and I fired, our agency automatics each putting one into the monster insect’s body, and a second into its head.  Greenish ichor sprayed the honey farmer’s corpse as the creature died and rapidly disintegrated into foul-smelling ooze.

“Dammit!” I cursed.  We’d need to have Gordon cleaned up and buried at government expense, once we finished this case.

“Ray, there are more!” Seven warned, pointing to the tunnel.

Of course.  There’s never just one bee in a hive.  “Make for the car!” I commanded.

I shot the next bug pushing through the boards, decapitating it, as the two of us ran for the Studebaker.

“Will the car’s steel keep them out?” I asked as Seven picked off two more that edged past the obstruction.

“Not sure,” she replied.

We kept firing as new bees emerged, but we’d have to reload soon, and then…!

I opened the Studebaker’s trunk and tossed a shotgun to Ruth as our automatics ran out of ammo.

“Ray, remember how we finished the centipede in that ghost town?” she asked.

She tossed her scattergun back to me.  “Hold them off!  I’m going to try the same thing with Gordon’s truck.”

With a pump-action shotgun in each hand, I would have done John Wayne proud, but the bees just kept coming.  More and more crowded the tunnel exit, their angry buzzing building like the drone of an air raid siren.

As I chambered my last round, Ruth yelled: “Ray, take cover!”

Gordon’s Ford rocketed past me.  “Ruthless” Ruth had jammed the accelerator somehow, and sent it kamikaze-style toward the tunnel entrance.

The entire mountainside rumbled as orange flames consumed the tunnel, frying the bees swarming the entrance into blackened husks.

A smell like burnt shrimp assaulted my nose as the shockwave set my ears ringing and knocked me on my can.  Fortunately, the blazing truck blocked any more bug attacks—for now.

“You’re getting pretty good at making cars into Molotov cocktails,” I observed, dusting myself off.  “Keep it up, and you’ll give ‘Boom Boom’ a run for his money.”

She laughed before growing serious.  “We need to call in the army, hope this burns long enough for them to get here.”

She patted our Studebaker and grinned.  “Then we’ve got one more cocktail to serve, and you get to continue your record of destroying agency property.”

When I first conceived Atomic Tales: Strange Invaders after writing “A Sci-Ant-ific Problem,” I came up with a small handful of ideas for follow-up stories.  One of those sequels was to be a hive full of giant bees in a tunnel in New York City.  (Partially inspired by cult classic, The Deadly Mantis and maybe an old Eighth Man episode from when I was a kid.)

That still seems like a pretty cool idea to me, and maybe someday I’ll do it.

But as I’ve been working through my story ideas, trying to put them into a cohesive continuity, I realized that a better place for the bee tale was in this transition area as the insect invasion expands and I reveal more of how the Strange Invaders stories tie together.

So, instead of NYC, we got giant bees in a water tunnel through the Rocky Mountains near Hideaway Park, Colorado.  The location and the tunnel are based on real things, though the resort town is now named Winter Park.  The combined railroad and water passage is called the Moffat Tunnel (West Portal) and it was built earlier in the 20th century.  (My story’s tunnel went into disuse and got smaller.)

I sometimes do a lot more research for these tales than ever shows up in the final draft, which is what happened in this case.

It’s possible that someday I may get back to using that NYC idea.  Recently, it occurred to me that it might be fun to do a series of Army vs. Bugs tales—a kind of grunt’s-eye-view—to parallel what’s going on in this series.  Doing an expanded version of the bee idea would seem a good option when a story takes the kind of turns that this one did, veering away from my original concept.

It would also be fun to see what happens after the main story when, at the end of a mission, our U.S.S.B. agents decide to call in the armed forces to mop up.

Click here to listen.  Story starts about XX minutes from the end. 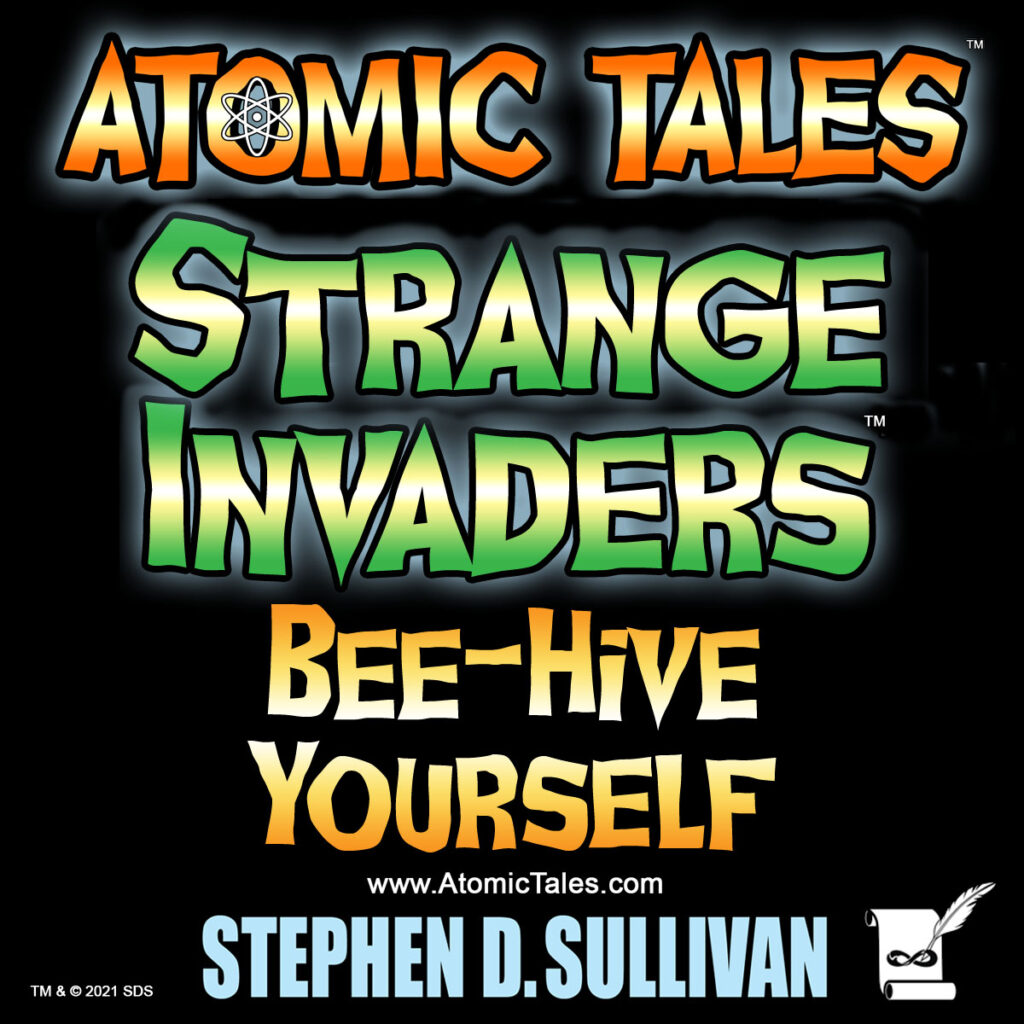 March in Wisconsin… In like a lion… Out like a totally different lion.  LOL But it was a pretty awesome month for movies, filled with fun from the Saturday and Tuesday meetings of the Monster […]