Somedays, you’re in the right place at the right time, and some days you’re not.  The verdict remains out on a recent day I wandered into the Teragons’ lab at HQ.

That particular morning, I was helping out secretary, Gigi Brock, by delivering some reports to the father-daughter scientist team who run this place.

Doctor Shannon Z. Teragon glanced through the papers I’d brought, puzzled over them a moment, and then turned to her father.

“Dad, I think I’m going to have to go out in the field,” she announced.

That probably surprised the Prof just as much as it did me.  The really big Big Brains at the US Science Bureau almost never leave HQ—and she and her dad are the biggest.

Professor Teragon looked up from the microscope on his lab table.  “Oh?  Why is that, Shannon?”

“I don’t like the results I’m seeing on that apelike creature we dug out of the Never Summer Mountains after Agents One and Four killed it.”

“You mean the yeti?” I asked, unable to keep from sticking my nose in.  “Why?”

“Because all the tests are saying that it wasn’t a yeti,” she replied, slapping the papers down on her desk, “just an ordinary ape.”

“Banana oil!” I shot back.  “That thing was eight feet tall and had glowing red eyes!”

“We’ve read the reports, Agent One,” her father assured me.  “Shannon and I aren’t doubting what you saw.  Clearly this was some kind of mutation.”

“But what caused it to mutate?” his daughter with the Ph.D pressed.  “Is it the same mysterious substance that’s growing the giant bugs?  We need more data to analyze, and these mutants keep decaying rapidly in the field, leaving nothing left to examine.”

“Except one crushed ape of extraordinary size,” I noted.

“Exactly, Agent One.  Dad, one of us needs to be on the spot when another of these creatures is killed, and I’m the obvious choice.”

“Well,” said her father, returning to his work, “pick a good team and stay safe.”

Three guesses who Doc Teragon picked to head up her team of anti-bug bodyguards.

Less than forty-eight hours later, the doc and I were venturing into a newly discovered giant ant nest in the foothills outside of Partoun, Utah.

The army had the area sealed off, not that there were a lot of people out in this part of the desert, anyway.  Shortly before we helicoptered in, they saturated the nest with some kind of super-deadly chemical—cyanide gas, maybe—guaranteed to knock the buggers out for keeps.

It probably wouldn’t kill any eggs, though, and that’s what Doc was counting on for her samples.

Of course, she took me and Agent Six—”Roughhouse” Rick Donlevy—with her as a precaution against any stragglers.  We also brought along Agent Four—Alec “Boom Boom” Murphy—just in case things got really rough.

I was hoping they wouldn’t.  Those army boys are usually great at their jobs, and we’ve been battling these giant ants almost since the beginning of this strange invasion.  Still, it’s always comforting to have some good agents with you in a pinch.  And as the four of us, geared up like science-fiction astronauts, rappelled into the opening of the giant ant hill, I wished somebody would pinch me.

My entire body was already sweating as we checked our equipment—from our anti-gas hoods to our cleated climbing boots—at the bottom of the first drop.  My fellow agents and I were each carrying twin sidearms, grenades, a machine gun, and a flame thrower, as well as lights and the exploring gear we needed.  Boom Boom had all that plus a bazooka and various infernal devices.  Roughhouse, who’s built like a bull, toted along some extra lab stuff for the doc—just in case.  Doc Teragon shouldered most of her scientific equipment, of course, wanting it all within easy reach.

I’m pretty damn sure she was the only one of us happy to be there.

Agent Six laughed, his big voice seeming to shake the sandy cavern the four of us stood assembled in.  “Boy, my sister is gonna be sorry she missed this trip!  None of us will ever hear the end of it!”  Roughhouse’s sister, “Ruthless” Ruth Donlevy a.k.a. Agent Seven, is the Bureau’s field-science buff.

“She can take my spot,” Agent Four offered, looking around nervously.  “I can blow this joint up from topside.”

“Agent Seven couldn’t get here in time,” Doc explained.  “Every hour delayed is another hour new ants might hatch and burrow out past the military cordon.”

“We better get going then,” I said.  “The sooner we can find the samples you’re after, Doc, the sooner the army can firebomb this place and seal it up for good.”

“Amen to that,” Six agreed.

“Just so long as I get to help,” Four added, patting one of his grenades.  (He’d brought about twice as many as the rest of us.)

“Onward!” Doc Teragon commanded, pointing to the tunnel slanting down into the earth.

She would have led us into the bowels of Hell herself right then, but Roughouse and I stepped up to take point, leaving Boom Boom to guard her—and the rest of us—from the rear.  Doc was our most valuable asset, after all. Better that one of us “expendables” should first blunder into anything unexpected.

The four of us cautiously hiked deeper and deeper into the nest, walking when we could, rappelling when we had to, roping ourselves together and using pitons specially designed by the doc and her dad on steep slopes.

We didn’t see much sign of the ants, which wasn’t surprising; as big as they are, these buggers disintegrate pretty quickly when they’re killed, just like those fireflies I first encountered back in Colorado years ago.

As we turned a corner, a hulking black shape blocked the corridor ahead, its faceted insect eyes gleaming in the beams of our flashlights.

Roughhouse and I fired a couple of shots into it before Doc yelled:

The warning came too late, though, and our bullets shattered the thing into a million pieces, like a dropped sheet of safety glass.

“Sorry, Shannon,” Rick apologized as the young Ph.D. glared at us through her protective hood.

“We’ll get samples before shooting next time,” I promised.

“That’s what we’re here for,” she scolded.  “Not for extra Bureau target practice.  Now, tamp down the butterflies in your bellies, and let’s move!”

She pushed past Roughhouse and me, taking the lead for a short time after that, despite our efforts to dissuade her.

“Does she think we want to stay down here any longer than absolutely necessary?” Alec whispered to Rick and me.  All three of us couldn’t help but chuckle.

We kept close behind the doc, though, always ready to charge to the fore if danger arose.

It didn’t take long before she found another huge carapace—at least three or four yards long—standing guard like an empty suit of armor.  When she tried to take a sample of it, though, it, too, crumbled into dust.

“Dammit!” she cursed.  “It’s been dead too long.  I hope the eggs in the Queen’s Chamber are still alive, or this whole expedition will have been pointless.”

“Let’s hope not,” Boom Boom muttered, hand resting on a grenade once more.  “I wouldn’t want to have to do this twice.”

Just then, the entire tunnel shook, and part of the wall behind him collapsed.  He barely hopped out of the way of the cascading sand and debris, as the air filled with a hideous screeching sound.

“It’s a live one!  Look out!” I cried, as both Six and I lit into it with our machine guns.

“Don’t damage it too much!” Doc shouted over the gunfire.

“Tell that to it!” Alec shouted as the monster ant surged toward him.

Agent Four lived up to his nickname; a well-placed grenade blew off the bug’s back half.

“There’s more in the tunnel,” he called.  “They must have been sealed in by the army attack.”

“Burn them!” Doc commanded.  “I can get the samples I need here.  Ray, watch our backs!”

“Roger,” I said, taking up position to guard the whole crew as Doc unlimbered her equipment and Alec and Rick torched the newly opened tunnel with blasts from their flamethrowers.

A tense hour later, all four of us scrambled back out of the giant anthill as some infernal contraptions Alec had left behind turned what remained of the nest into a firestorm.

“Not much for the army to clean up after this,” he said proudly as a final explosion filled the air around us with smoke and sand.

“Get what you needed, Doc?” I asked as all of us stripped off our protective gear, and the army moved in to check Boom Boom’s work.

“I sure hope so,” Rick commented.  “I don’t wanna go through that again!”

Doctor Shannon Teragon nodded, a far-away look in her eyes.

“That glowing green ichor these bugs have… You said that the snow monster bled green, too?”

“It’s like nothing I’ve ever seen in nature,” she mused.  “And it decays at an astonishing rate.  I barely got a look at it before it was gone.”

“It means that this isn’t a natural mutation,” Doctor Teragon concluded. “I think someone may be creating these monsters deliberately.”

ABOUT “INTO THE ANT NEST”

I can’t think about giant ants without remembering the seminal film in the giant bug genre, THEM!  It’s a classic not only in its own sub-genre of monster-insect films, it’s also a Science Fiction classic, period.

In a sense, THEM! inspired this whole series, not only because so many giant bug movies followed it, but also because the whole genus led to the fannish tempest in a teapot that “giant bugs are impossible.”  That led me to write the first AT story, “A Sci-Ant-ific Problem,” explaining how you could have giant bugs in the real world.  (If I could afford to commission metal sculptures, I’d probably have a whole yard full of them!)

THEM! also has a great cast of characters, including an intrepid FBI agent, a brave policeman, and a strong-willed woman scientist (one of my favorite of all SF characters) whom I’ve tributed in the character of Dr. Shannon Z. Teragon.  I like the film so much I’ve even written an appreciation of it for a forthcoming SF/Horror book.

So, little wonder that the first story in this series, the one that inspired all the rest, was a giant ant story.  And almost as soon as I’d finished it, I not only wanted to do more US Science Bureau tales, but also more giant ant stories.

But ATOMIC TALES: Strange Invaders couldn’t just be a series of giant ant battles.  Thus, I had to lay out my world building, pace myself, and bide my time until the chance for another ant episode appeared.

Now is that time.  And even more than the first one, this story is a big tip of the hat to my favorite bug movie.  (Though if you’ve seen the film, you probably figured that out.)

It won’t be my last AT ant epic, though.  I promise.

Click here to listen.  Story starts about 61 minutes from the start. 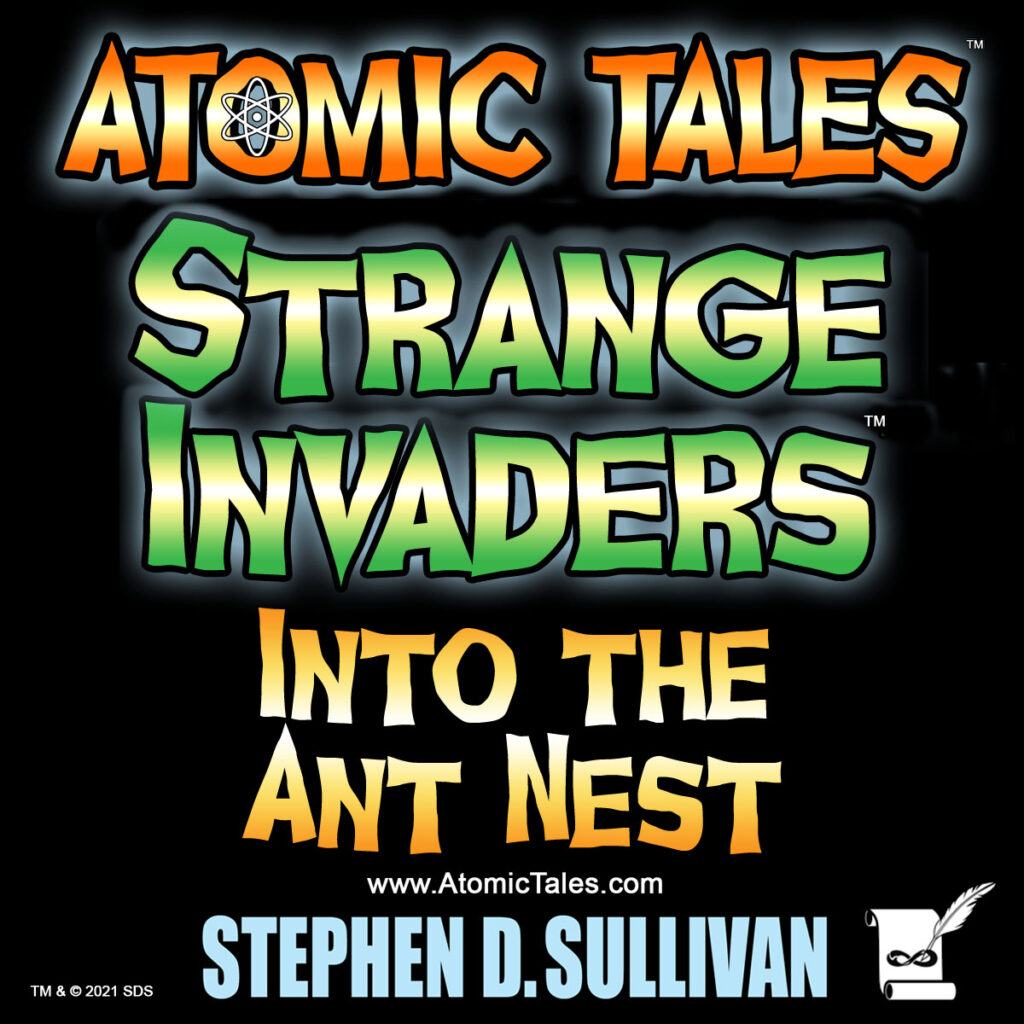 Featured on THE INFINITE BARD, Thrilling Adventures. “What are you up to, Miss Brock?  Those papers don’t look like the usual Science Bureau secretarial work.” “Oh!  Miss Rockford… I mean… Agent Three!  I didn’t hear […]

I’ve noticed that “Monster Shark” has become one of my bestsellers lately, so I thought it would be good to blog about the story on the newly revised site. MS is an Umira the Accursed […]

So, life got complicated for all of us with the pandemic sneaking out of China and places far away and into the US at the end of February and the start of March, 2020.  But […]