“What are you up to, Miss Brock?  Those papers don’t look like the usual Science Bureau secretarial work.”

“Stealth is one of the reasons the bureau hired me.  It came in handy working overseas during the war.  Is that a mission tape you’ve got in your machine?”

“You can call me ‘Rocky.’  Everyone in the agency does.”

“I’m trying to educate myself—catch up on old missions.  I want to know everything…  So I can become an agent one day.”

“I didn’t get this job just because my dad’s a general, you know.”

“You’re in this mission I’m reviewing right now, you and Agent One—Agent Five, too, I think.”

“Ah.  That was very early in the invasion.  Back then, we had no idea what was going on.  We were lucky to get out of it alive.”

“Do we know what’s going on now Agent Th… I mean, Rocky?”

“We’ve got a better idea of what we’re up against, at least.  Well, Gigi, I’ll let you get back to your studies.  Good luck.  The bureau needs more smart agents.”

“I sent for Agent Five before I went to bed last night, Agent One,” Suzanne “Rocky” Rockford informed me as we walked from our rustic motel rooms in Simmons, Colorado, toward the small restaurant across the parking lot.  “He’ll be here by midday.”

“Do you really think that’s necessary, Agent Three?” I replied, tamping down a prickle over the breach of protocol.  As lead agent, I’d usually have been the one to call in reinforcements.

Three shot me a genial smile and paused in mid amble.  “Ray,” she said, “we’ve got a trio of mysterious deaths and two disappearances in the last month.  And yesterday, a bunch of locals told us that they’d seen things they couldn’t explain zooming around in the sky.  So, unless those three corpses are coincidence…”

“”Yeah.  It doesn’t seem like whatever’s going on is related to those mutant fireflies I ran into,” I mused, “even though their breeding ground in Moret is just across the valley from here.”

“Not unless your giant glow-bugs have suddenly gone hostile,” Three agreed.  “Either way, I think a sharpshooter might come in handy.  C’mon… I’ll buy you a quick ham and eggs and we’ll swap theories on the drive to the site of the first death.”

I nodded and fell into step beside her.  When Rocky Rockford is right about something, this Science Bureau agent is smart enough not to argue.

After breakfast, the two of us rolled up to the site of the initial death in our agency Studebaker.  We’d talked things over, but the case remained mysterious.  The victims—if they were victims—had all been older locals who lived alone: a widow, a widower, and a hermit hiding out on his isolated family farm.  All the corpses had been strangely swollen, and there had been some disfigurement, too.  The local authorities couldn’t dope out the bloating or the mutilations, though they put down the second as postmortem wildlife predation.

Sightings of UFOs—lights and other unknown objects in the sky—accompanied each death.  Because the bureau had solved the Moret case across the valley a month or so earlier, we’d been called in again.

I have to admit that when I joined the United States Science Bureau, I wasn’t sure what to think.  Professor Teragon’s declaration that “strange things” had gone on during the war and America would need to guard against future para-scientific incursions had seemed a bit “out there” to me.  But funding for the agency was strong, and both the prof and his brainy daughter had sterling reputations in the science community.

Besides, this former Marine wasn’t about to turn down steady government work in the aftermath of World War II.  With so many soldiers home from overseas, good-paying jobs were hard to nab.  I’m sure Rocky found the same thing after leaving the intelligence services at the war’s end.  But what both of us probably assumed would be just a series of Teragon-inspired snipe hunts were now starting to look not so crazy after all.

Who would ever have thought giant lighting bugs might be a thing?  Prof Teragon and his daughter with the PhD, apparently.  That being the case, who were Suzanne and I to judge?

We started our investigation with the first possible victim, David Ryan.  Ryan was a former rancher turned hermit, and his place lay on a wooded Colorado hillside above a swampy lake surrounded by tall cattails waiving in the warm, late-spring breeze.

The forest had re-taken what once had been Ryan’s pastureland, and young lodgepole pines, spruces, and firs filled the air with their sharp, sweet fragrance.

“Bit of a dump,” Three remarked as we approached Ryan’s ramshackle A-frame home.

A quick but thorough search of the place didn’t turn up anything more than the police had found—which was to say, nothing pointing to anything other than natural or accidental death.

“But they never found the guy’s head?” Rocky asked.

“No trace of it,” I confirmed.

“Something like that, probably,” I agreed.  “Though it’s weird for an animal to just take part of a corpse.”

“What about your lightning bugs?”

“They eat pollen or nectar—or so the Doc assumes, since we haven’t been able to take any specimens.  Is that a barn I see through those trees?”

Three nodded.  “Looks like.  Even more of a mess than the house.  Want to check it out.”

“Yeah.  We’ll give it a quick look and then maybe move on to the other sites.”

“It’d be a shame if we’d come all this way and these cases turn out to be nothing unusual.”

“We get the same government salary, either way,” I noted.

“I guess.  If this comes out bust, maybe we could try to spot some of your fireflies before we head back to Washington.”  She laughed.  “I always wanted to see a ‘UFO!’”

We hiked through the scrubby young pines toward the dilapidated gray structure.  Time and the weather had caved in the building, so that it now looked more like a jumble of pick-up-sticks than a barn.

When we’d come within about fifty yards of the heap, Agent Three suddenly stopped.

“That buzzing sound… Ray, look out!”

Her automatic barked once as I turned, drawing my own gun.

A yellow and black wasp the size of a dinner platter came straight for my face.  I couldn’t bring up my pistol in time to stop the nightmare bug hitting me.  Its stinger looked the size of my little finger.

Fortunately, Agent Three’s second shot nailed it.  The thing flopped to the pine-needle-covered ground, bleeding greenish goo as it died.  It stank like a garbage heap.

“Sorry I missed it the first time,” Three apologized.  “It kind of spooked me.”

That’s when we noticed that the buzzing sound growing louder.

Fiendish yellow and black insect heads the size of softballs began peeking out of every nook and cranny in the tumble-down barn.

“Back to the car,” I commanded.

But the deadly bugs had already swarmed between us and the Studebaker, cutting off our retreat.

“I hope you’re right,” I said as we sprinted for the cattails, shooting the closest giant insects out of the sky as we went.

The deaths of their fellows seemed to discourage the monsters, but only for an instant.  Soon, an angry cloud of at least two dozen had gathered by the barn.  They turned and flew full speed toward us.

We dashed into the tall reeds, our boots sloshing into the chilly lake water, and crouched down, firing at the forerunners.

Our gunshots echoed across the swampland, momentarily overwhelming the drone of giant insect wings.

“How many clips do you have?” I asked.

“Same.  What then?  Dive in and hold our breaths?”

“Unless you have a better idea.”  Three smiled grimly.  “At least we know why those bodies were weirdly bloated—stung to death.”

Before I could, something heavy hit me on the back of the skull.

For a moment, my whole world was gunfire and ear-splitting buzzing, and then everything went dark.

“Jeepers!  Did you have to shout?  I nearly jumped out of my skin!”

“What are you doing here?  Shouldn’t you be typing or filing or something?”

“Well, break time is over Gloria Gale!  How would it look if someone else found you goldbricking on the bureau’s time?”

“But I wasn’t goldbricking, Da… General.  I was studying case files.”

“Young lady, when are you going to give up this absurd notion of becoming a Science Bureau agent and just do your job?”

“But Three and Seven and a lot of other women are agents!”

“Women, not girls barely out of school, Gigi.”

“You’ll have to get back to your daydreaming later.  Aren’t you supposed to be picking up Doctor Teragon from the airport?”

“No, you wouldn’t.  And lock up those tapes before you go!  Those are classified!”

ABOUT “THE BUZZ OF DOOM”

To get right into the meat of the series, I realized early on that I’d have to create some flashback stories in Atomic Tales.  The fact that I’d published “A Sci-Ant-ific Problem” eleven years earlier than the rest of the series made that necessary, because in that story it’s clear that the giant ant problem is something ongoing, and something that Agent One has dealt with before.

So, I set my mind to pondering how would one “logically” get to a place where humongous ants didn’t seem so outrageous.  I needed a progression for this strange invasion of giant insects.  As I wrote this episode, my plan was to have a series of “origin stories” of three or maybe five tales that get the US Science Bureau to the point they are in that first short.

Because I wanted the main agents vs. bugs  storyline to progress, too, I decided to insert the backstory pieces as flashbacks amid the main arc.  Since Gigi Brock had been great fun in her first appearance, I decided to use her again, though in a slightly different frame.

Usually, when I write a book or series, I have a good idea of both the beginning and the end—it’s how to get between the two that’s the tricky part.  Not having my first episode in Atomic Tales: Strange Invaders at the beginning of the story has made things a bit more challenging.

But, hey… Challenges is what we writers live for, right?  (We certainly don’t live for the money or fame!) 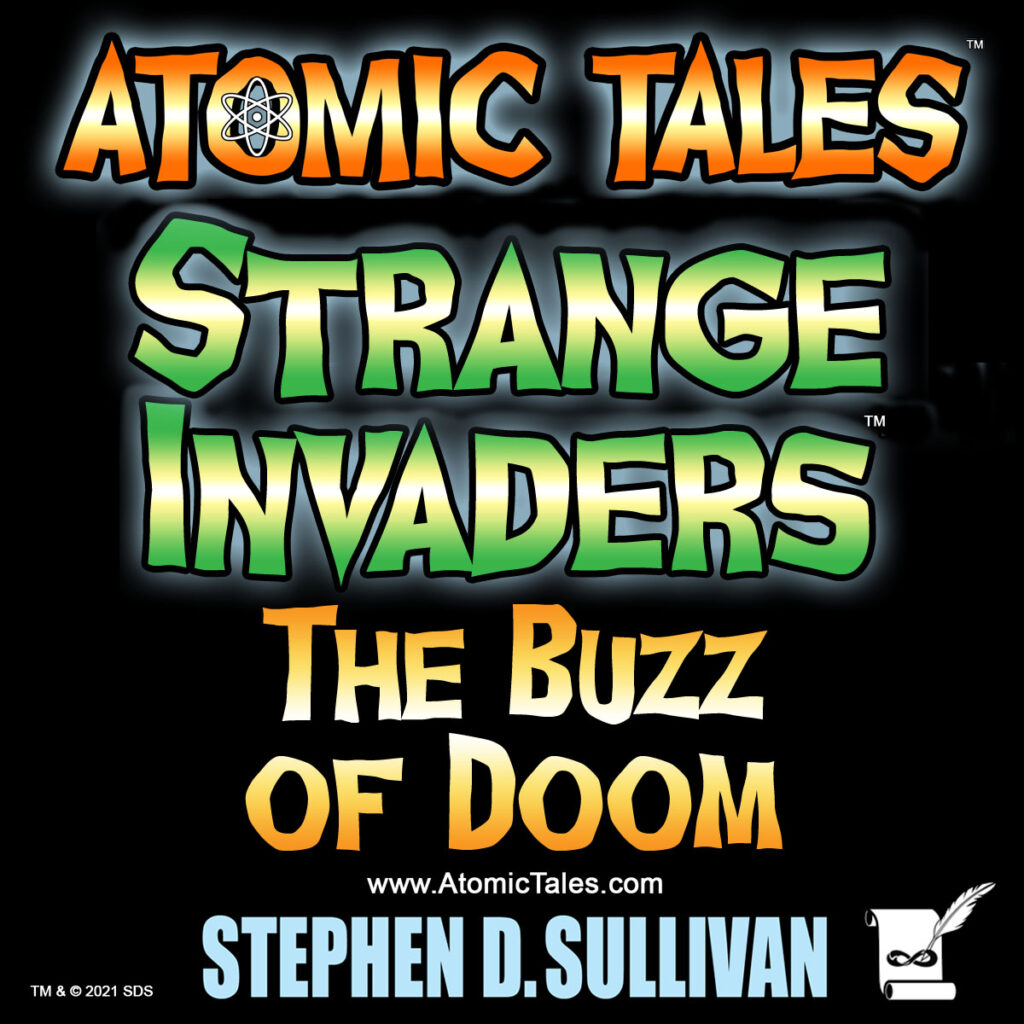 I had a great time chatting with the Former Zombie-in-Chief from Mail Order Zombie, Derek M. Koch, on his new show Monster Kid Radio.  Given our backgrounds, I bet you’re not surprised that the topic […]

I’ve noticed that “Monster Shark” has become one of my bestsellers lately, so I thought it would be good to blog about the story on the newly revised site. MS is an Umira the Accursed […]

April 2021 Mini-Reviews – Rodan to Frankenstein & the Monster From Hell

April 2021… Where did April go? Oh, yeah, it was Roger Corman’s 95th birthday.  (Happy Birthday, Roger!)  Films and shows related to that captivated some of my time, as did fan-made Star Trek shows, courtesy […]