Gary Con IV was this past weekend, so I took the time to hang out with my friends (and fans) and play some games in honor of my late friend, E. Gary Gygax (co-creator of Dungeons & Dragons).  A great time was had by all.  So, I decided to take a “rest week” between the end of Daikaiju Attack and a couple of weeks of About the Story Daikaiju Attack posts. 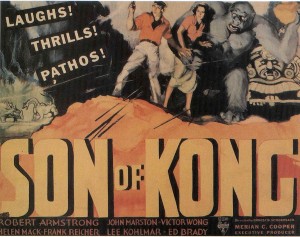 There’s still some cool stuff from me that you may not have discovered yet.  Amid all the Daikaiju Attack-ing and Tournament of Death 3-ing, a trio of my podcast appearances got lost.  I spent an episode of the B-Movie Cast talking about The Night Stalker — the original Carl Kolchak film.

Listen to The Night Stalker episode of the B-Movie Cast here.

I also did a pair of shows about the often-overlooked Son of Kong with Monster Kid Radio.

Hopefully those shows will give you your monster (and giant monster) fix until the post-epilogue chats about Daikaiju Attack.  And besides, you can always re-read the whole epic to keep yourself busy.  🙂

About Steve Sullivan 400 Articles
Stephen D. Sullivan is an award-winning author, artist, and editor. Since 1980, he has worked on a wide variety of properties, including well-known licenses and original work. Some of his best know projects include Dungeons & Dragons, Teenage Mutant Ninja Turtles, Dragonlance, Iron Man, Legend of the Five Rings, Speed Racer, the Tolkien RPG, Disney Afternoons, Star Wars, The Twilight Empire (Robinson's War), Uncanny Radio, Martian Knights, Tournament of Death, and The Blue Kingdoms (with his friend Jean Rabe).
Website

Support my new Kickstarter – Tournament of Death 3! This is the thirty-first part of a serialized giant monster novel.  New free episode every week! Click here to read Episode 1.  Click here to get “Daikaiju vs. Cthulhu” – […]

We’re in the final hours of the Kickstarter and we’re doing great! Now is the time to make sure you and your friends doing miss out! For Just $16 you’ll get the TOURNAMENT OF DEATH […]