Cube-Square Law be damned — I was staring down the mandibles of a fifteen-foot long ant and in no mood to argue about science.

I drew my automatic and fired off a couple of shots as I ran.  Naturally that did about as much good as uncorking a pop-gun at it.  The ant crawled over the top of the dune, its gray-black form almost invisible under the star-filled Arizona sky.  If not for the headlights of my car, which I’d left on when I parked on the side of the highway, I’d have never even seen the thing coming.

Last time I stop to relieve myself in an out-of-the-way spot while on an investigation!

Remembering a movie I’d seen as a kid, I aimed my next shots at the beast’s antenna and managed to hit one of the vulnerable areas in between the joints.  I’d say it was a lucky strike, but three years in the service and five in the bureau had more to do with it than random chance.

I may not be much of a scientist, but I do know how to shoot a gun.

Disabling one antenna confused the beast, and it seemed to lose track of me for a moment.  That gave me the precious time I needed to sprint for the car.

The bug regained its senses and honed in once more, scenting me in the air or seeing me with its huge compound eyes — I didn’t know which and I didn’t really care.  The point was it was after me again, and — training or no — I was woefully unprepared to face an ant the size of a Studebaker.  No flamethrowers, no bazookas, not even a Tommy gun in my trunk.

How can an ant be as big as my sedan?!

Professor Teragon explained it to me once. The size of these things has to do with adaptive mutation. No, giant bugs cannot be constructed the same way as your everyday pest — their exoskeletons just don’t scale up to support their weight., nor do their other systems. You could, however, easily fashion a replica of such a monster out of steel and other modern materials.

Basically, that’s what the bugs’ biology has done.

Who knows what kind of stimulus could cause such a freakish and unlikely set of mutations — well, Prof Teragon probably does, but that’s beside the point.  The point is the giant insects are here, scattered throughout the US, and they’re built like living tanks.  I just didn’t expect to find one while I was taking a whiz by the side of the road in The Middle of Nowhere, Arizona.

Obviously, we needed to expand the parameters of our investigation — and call in the marines.

I reached my car with the bug a scant hundred yards behind.  I rammed the Studebaker into gear; the transmission crunched and the tires squealed as I popped the clutch.  I pounded the gas pedal all the way to the floor.

The sedan shot forward, down the highway, across the shoulder, and right at the giant bug.  The ant kept coming, hurtling straight for my onrushing vehicle.

I felt like I was playing a nightmare version of “chicken.”

They’re not scared of anything, these bastards.

I rammed the ant with all the speed my six cylinders could muster.

The front of the car folded up like tin foil, but I cut the thing’s legs out from under it like a star quarterback throwing a front-page tackle; armored or no, the ant’s legs were still its weak spot.  The bug crumpled, spraying acrid-smelling vital fluids into the air.  Half of the monster fell atop the sedan. The thing’s head cracked open from the impact, but its carcass still crushed the Studebaker’s passenger-side roof almost to the top of the front bench seat.

I’d like to think that I avoided being killed because of good aim and fast reflexes, but mostly it was sheer luck and solid construction by the automaker’s South Bend assembly line.

They don’t call this model “Champion” for nothing.

The ant’s huge jaws kept snapping, looking for prey,  for a full five minutes after it died.

Those were long, anxious moments, let me tell you.

The car’s passenger compartment had crumpled around me, but left me intact.  I could even open the driver’s side door to get out — if I had wanted to.  As it was, I thought it the better part of valor to stay in the sedan and call for reinforcements.  I had a hell of a time reaching the two-way radio, though; it was located on the passenger side.

It took me at least fifteen minutes to dig out the handset.  Fortunately, the electronics survived the crash.

One ant down; one problem licked; God only knew how many more out there waiting to plague me, the bureau, and the rest of the world.

For all I knew, there were more of them lurking in the desert hills, watching me at that very moment.

That’s what we in the bureau call “job security.”

So, I sat in the remains of the car and waited for backup.

I also waited to finish taking that whiz.

At least, now, I had plenty of time to zip up.

And I’m sure that at this very moment, right this instant, some smart-ass scientist is writing up some paper telling me how everything I just went through is physically impossible according to the cube-square law and half-a-dozen other scientific principles I’ve never even heard of.

All I have to say to that wiseguy is this: Take it up with Professor Teragon.

Or, better yet, take it up with the ants.

This tale was first written in 2011, when I got tired of hearing about how giant ants were “impossible” because of the cube-square law.

Well, I thought, those people are clearly only thinking in terms of scaling up the standard insect biology.

But there was nothing that said that the internal structure of the giant ants in THEM!—one of my favorite giant monster films—is the same as the tiny ants that they show crawling around in that film clip in the movie.

Thus, to me anyway, it makes sense that giant insects would have a vastly different biology than their tiny cousins.

So, I decided to write about it, and take a little poke at all those people being super-serious about the fact that giant ants could “never” exist.

NEW!  You can now listen to this story read by Christopher R. Mihm from SaintEuphoria.com!

Click here to listen to the story on Monster Kid Radio.  (Starts after opening segment, about 6 minutes in.) 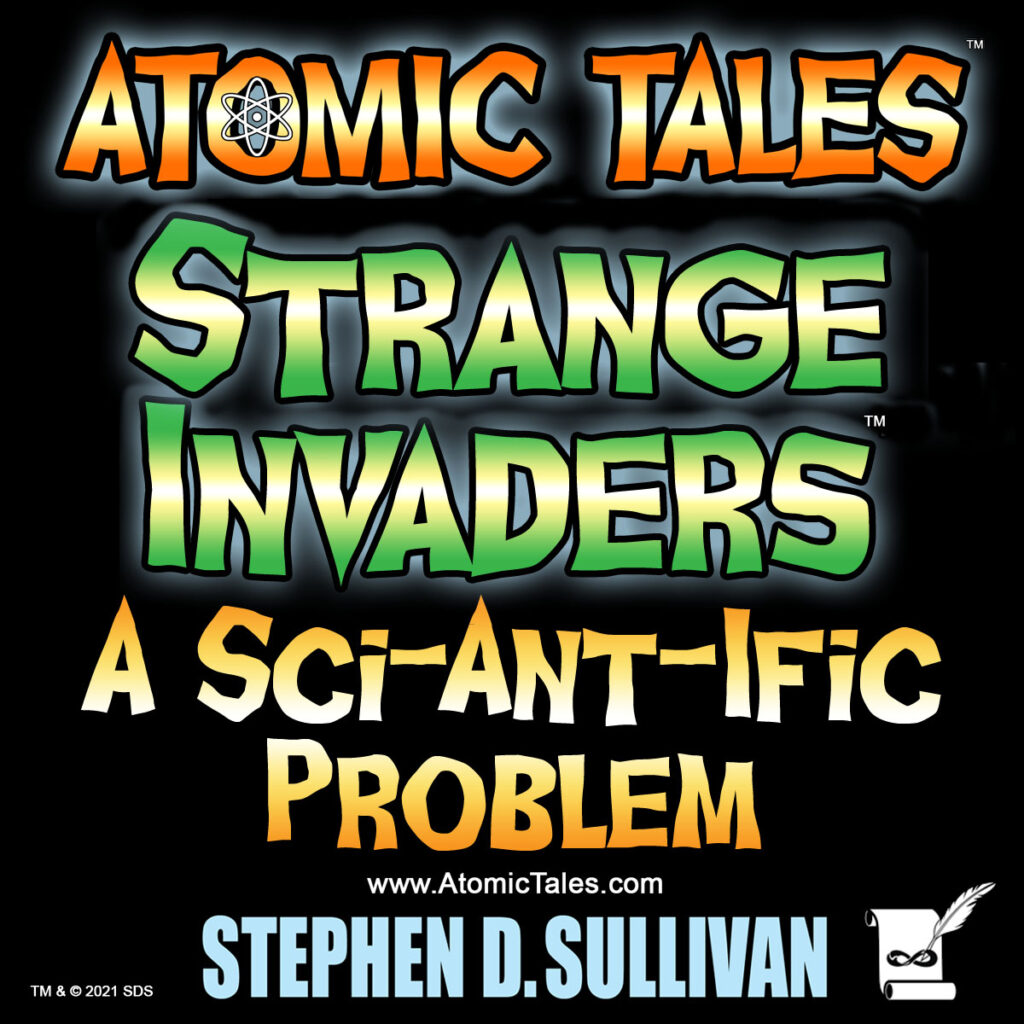 About Steve Sullivan 397 Articles
Stephen D. Sullivan is an award-winning author, artist, and editor. Since 1980, he has worked on a wide variety of properties, including well-known licenses and original work. Some of his best know projects include Dungeons & Dragons, Teenage Mutant Ninja Turtles, Dragonlance, Iron Man, Legend of the Five Rings, Speed Racer, the Tolkien RPG, Disney Afternoons, Star Wars, The Twilight Empire (Robinson's War), Uncanny Radio, Martian Knights, Tournament of Death, and The Blue Kingdoms (with his friend Jean Rabe).
Website

Derek M. Koch called me up the other day to talk about the trailer to The Mummy — the new one, starring Tom Cruise.  A lot of people have been talking about it, as it purports […]

IN THIS EPISODE: …The police try to figure out what the hell just happened… Join my Precognitive Team ($2 & up) and get all the stories in PDF format in advance! Welcome to another chapter of Dr. Cushing’s […]