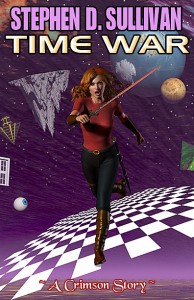 A cover for my story “Time War” – featuring everybody’s favorite woman-warrior,  Crimson.  The story appears in the Stalking the Wild Hare anthology, available now at Amazon. I did the cover so that I could include the story in a project being put together by Mike Stackpole.  At some point, I’ll release it on its own or in a Crimson collection, too.  But for now, you can enjoy the cover, and pick up some wallpapers on my Free Wallpapers page.

About Steve Sullivan 407 Articles
Stephen D. Sullivan is an award-winning author, artist, and editor. Since 1980, he has worked on a wide variety of properties, including well-known licenses and original work. Some of his best know projects include Dungeons & Dragons, Teenage Mutant Ninja Turtles, Dragonlance, Iron Man, Legend of the Five Rings, Speed Racer, the Tolkien RPG, Disney Afternoons, Star Wars, The Twilight Empire (Robinson's War), Uncanny Radio, Martian Knights, Tournament of Death, and The Blue Kingdoms (with his friend Jean Rabe).
Website

With The Crimson Collection now available for loan and purchase on Kindle (yes, you can borrow it for free if you’re an Amazon Prime member), now seems like a good time to spotlight one of the […]