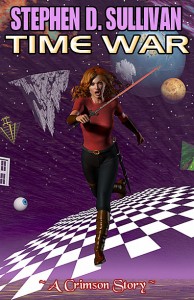 A cover for my story “Time War” – featuring everybody’s favorite woman-warrior,  Crimson.  The story appears in the Stalking the Wild Hare anthology, available now at Amazon. I did the cover so that I could include the story in a project being put together by Mike Stackpole.  At some point, I’ll release it on its own or in a Crimson collection, too.  But for now, you can enjoy the cover, and pick up some wallpapers on my Free Wallpapers page.

IN THIS EPISODE: …The mummies arrive… Opal & Topaz juggle work, boyfriends, and Vincent… (Just a reminder that my Patreon subscribers at $2 and above get all stories in advance!) Welcome to another chapter of Dr. […]

Forever Crimson & Crash of the Titans

Just finished uploading “Forever Crimson” and “Crash of the Titans” to Kindle, so I thought I’d share the covers with you. They should both be available for purchase before Monday.  Drop me a line and […]