“I have to admit, this is one empty-looking town.” Agent Seven remarked as she gazed down the sandy streets of the tiny southwestern community.

“If you can even call it a town,” I noted. “It looks like something out of an old Randolph Scott movie.”  Tumbleweeds skittered across the unpaved streets, over the plank sidewalks, and between a double handful of sun-faded wooden buildings.

“Yeah.  More like a cheap television western set,” Seven agreed, brushing off her khaki trousers, which the high desert wind had already covered with yellowish dust.

I did the same with my rumpled deep blue pants.  “I appreciate you picking me up,” I said, “but I’d been hoping to get a change of clothes before my next assignment.”

“No time,” Seven replied, walking from her agency Studebaker toward the first ramshackle structure.  She scrutinized our surroundings with scientific intensity as she went.

I checked my pistol—it never hurts to be prepared—and followed close behind.  Something about this place was raising the hairs on the back of my neck, and it wasn’t the dusty wind.

“The bureau had reports of glowing discs in the area last month.  And now…”  Seven edged to one of the town saloon’s swinging doors, carefully pushed it open, and peered inside  “…It seems like the entire populace has disappeared.”

Both of us scoped out the weathered bar, but the place was definitely deserted.

“All nineteen of them,” she concluded.

“And the Teragons think it’s related to flying saucers, somehow?”

Seven frowned and strolled down the creaky boardwalk toward the next building, a general store, judging by the sign.

“The doc and her dad don’t think anything, Agent One,” Seven told me.  “They need more info. Which is why they sent me to scout the situation.”

She frowned playfully.  “You just happened to be on the way.  If you hadn’t wrecked another car, you would have been home by now.”

“Hazard of the job,” I replied.

“At least when you’re on the case.”

“Don’t make me wish they’d sent your brother instead of you, Seven.”

She laughed.  “You think this requires more muscle than brains?”

Both Seven and I hit the deck.  The boardwalk groaned under us.

“Was that a shot?” she asked, reaching for her pistol.

“Maybe,” I replied.  The automatic was already in my hand.  “Sounded like it came from near the car.  Keep low.  This place might not be so deserted after all.”

Staying in a crouch, I hurried to the edge of the boardwalk with Seven right behind.

I peeked around the corner to where we’d left the bureau Studebaker.

Then I relaxed slightly and holstered my gun.

“What is it?” she asked, glancing around my shoulder.

“Just a blowout.  Must be the desert heat.  You have a spare, I assume.”

“Unless the agency shorted us,” she replied, starting to holster her weapon, as well.

Her face fell.  “But not two spares.  Rats.  We’ll have to find a phone or telegraph.  Or maybe this so-called town has a filling station with new tires at its far end.”

The groaning sound of crumpling metal interrupted her.  We both watched in horror as something began to drag the rear of the Studebaker into the sandy ground.

The ground trembled under me as I grabbed Agent Seven around the waist and jumped with all my might.  We landed maybe three yards farther on, which was just enough to take us away from the hole that had been opening under her feet.

“What the heck?!” Seven blurted as out of that hole came a living nightmare—an insect head as big as a keg of beer with pincers like butcher knives.

The thing snapped his terrible jaws several times at the space we had just vacated, and then the monster disappeared back into its sandy hole.

“Move!” I shouted, springing to my feet and running back toward the boardwalk.

I shook my head.  “Ants don’t attack from underground.  This is something else.  Something new.”

“How can a bug be so big?” she asked, incredulous. “ I mean, I read the reports from you and the others, but…”

“Get Teragon to explain it to you.”

“Either.”  Now the boardwalk was shaking under us.  Apparently, our vibrations were attracting this monster.

“Jump back!” I commanded, and both of us did.

Just in time, as the boardwalk in front of us erupted into a spray of broken planks and nasty splinters.

“Centipede!” I cried as I took aim and fired.  She shot as well.

My bullet hit the thing in one of its oversized eyes.  Seven’s ricocheted harmlessly off the monster’s reddish carapace, but the wound I gave it was enough to drive the thing back underground.  I glared at my fellow agent.

“Your brother’s a better shot,” I observed, angrier than I should have been.

“Well, if it makes you feel any better, I wish he was here now instead of me, too!”

“Sorry,” I replied.  “That was unprofessional of me.”

“Just keep still,” she hissed.  “I think it can sense our vibrations.”

“Can you heave that rain barrel into the street?  Draw it away from us?”

I grunted as I tried to lift the keg resting on the boardwalk next to me, but it was probably a quarter full.  “Too heavy.”

A solid kick knocked it over, though, and the barrel rolled, sloshing as it went, down the hard-packed street.

The ground shook beneath us once more.

We ran back the way we’d come as the monster centipede burst from the street and crushed the rain barrel in one bite.

“I think I know what happened to those missing people,” I said.

“Not flying saucers,” Seven agreed.  “Keep that thing occupied, would you?”

“Sure,” I said, kicking over another rain barrel.  This one wasn’t full at all, and the monster was on it in an instant.

I took the opportunity to put out its other eye with a well-aimed shot.

The thing screeched horribly as it dove back underground.  At least now it’d be looking for us blind.

Seven reached the Studebaker and started fiddling around near the driver’s rear quarter panel.  “Get over here, would you?” she instructed.  “Jump up and down on that side.  We need to get the car to bounce a bit.”

“Vibrations to attract that thing”

“We gonna be its lunch?” I asked nervously.

“Not if we’re lucky,” she replied.

Seven’s a field science expert, so I wasn’t about to argue with her, whatever her plan might be.

I got on the passenger side, just in front of rear wheel wells, and started bouncing for all I was worth.  She did the same on the driver’s side.

The back of the car was sunk in the ground up to the bumper already, so the whole thing felt pretty stiff, but, working together, Seven and I soon got a decent rhythm going.

Then the Studebaker started to shake on its own as the blinded monster’s pincers grabbed onto the back, and the gigantic bug started to drag the automobile under again—this time in earnest.

“Just as long as we’re not the live ones it’s got!”

We kept bouncing as the car quickly sank into the sandy street.

I leapt, landed five yards from the rapidly vanishing hulk, and kept rolling, just in case.

Seven jumped, too, and I saw something flash in her hand—a cigarette lighter?—just before she did.

She rolled to her feet when she landed and pointed toward the ramshackle buildings.  “Get to cover!”

Both of us ran as fast as we could, reaching the boardwalk on far side of the street from the doomed car just as…

A muffled explosion shook the whole place and sent Seven and me toppling to our knees.  If you know what you’re doing, a full gas tank can make a heck of an explosion.

Seven knew what she was doing.

She stood and laughed, brushing off dust once more.  “Still wish they’d sent my brother?”

I shook my head as I rose.  “No, ma’am.  One thing worries me, though… What if there are more of these monsters?”

Seven took a deep breath and sighed it out.  “The briefing said this was an old mining town, so I guess more of those buggers could be lurking underground.”

“Well… Did you happen to notice that big propane tank at the edge of town?”

I smiled and nodded.  “And to think… I used to wonder why they called you ‘Ruthless’ Ruth Donlevy.”

Almost from the moment that I wrote the first Atomic Tales: Strange Invaders story, “A Sci-Ant-Ific Problem,”  I knew that I wanted to write more stories in that milieux.  The possibilities inherent in a world where there was an FBI-like “science patrol” battling giant insects and strange monsters sounded like too much fun to just leave as a one-off.

Not long after typing up that flash fiction tale, I jotted down notes in my commonplace book for possible further stories.

April 2020, in fact, nearly ten years later… During the first wave of the pandemic.

That’s when I decided that maybe it was time to dive back into the idea, give it a proper series name, and figure out where it was going next.

That’s when I wrote “Ghost Town Gambit,” though I struggled with the name until my revision in October 2020.  (I had a bunch of interesting but mostly silly names in mind— The Feet that Eat  – Eat Feet? Beat Feet! – The Menace Beneath—the last of which I decided to save for another day.)

I’m writing this six months later, too.  So, I don’t remember whether, back in April, I dived into that second story and then created a huge series bible, detailing all the agents and who they were and how most of the Atomic Tales worked, or if I wrote the story and then did that, or if I worked on both simultaneously.

But, in any case, by the end of April 2020, I had this weird giant centipede story done, and the structure of the organization worked out, and a good chunk of the backstory for why all this weird stuff was happening.

Along with all that, I also chose the titles Atomic Tales and Strange Invaders and registered them as URLs (along with a title for the still-secret sequel to this series).

The big question remaining, though, was: How would I unleash Atomic Tales: Strange Invaders on the unsuspecting world?

Click here to listen.  Story begins about 19:20 after the start of the podcast. (But listen to the rest, too!) 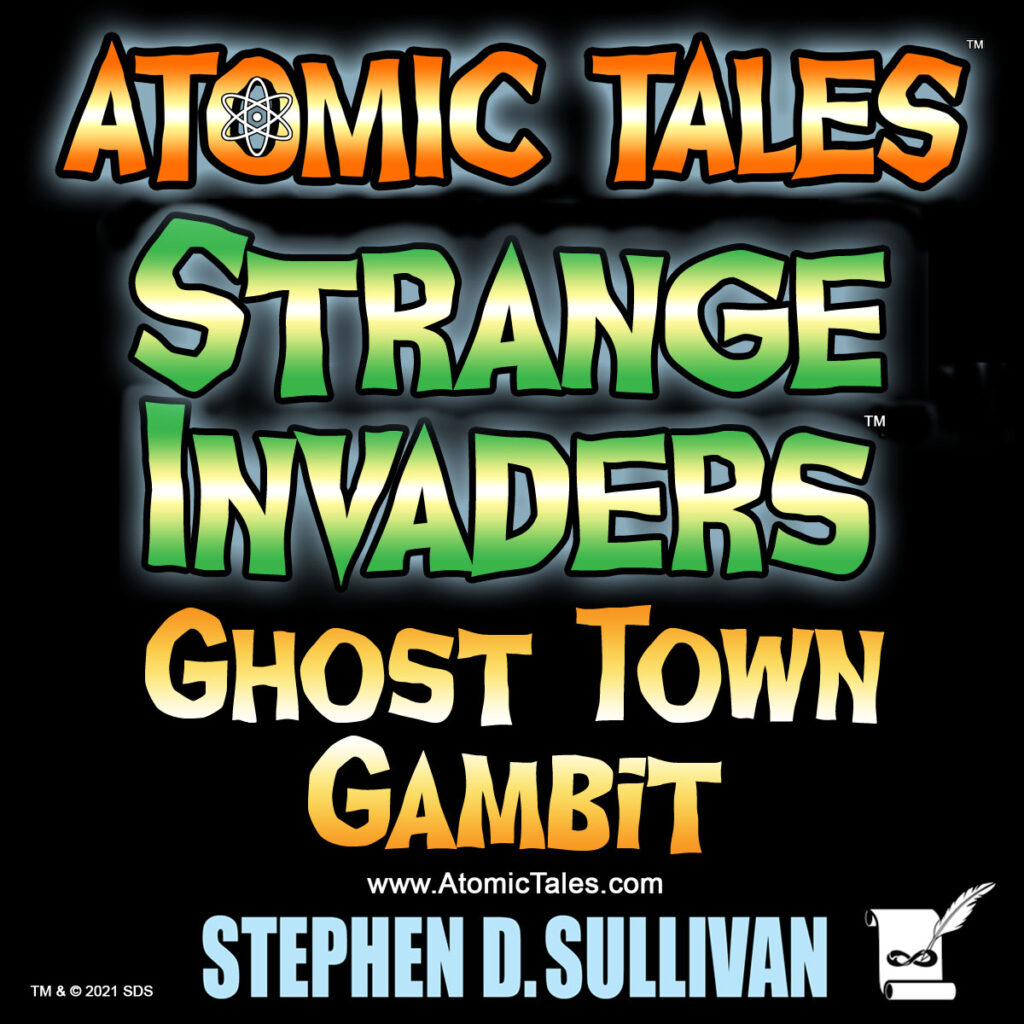 Featured on THE INFINITE BARD, Thrilling Adventures. A production issue caused us to flip the recording of stories #4 & 5.  As a result, we’re switching the order they’re being posted in.  But, since they’re […]

Featured on THE INFINITE BARD, Thrilling Adventures. White hot pain shot through me, and my pistol clattered to the messy lab floor as the scimitar-sized insect claw stabbed into my right shoulder. “Ray!” Agent Two […]

Featured on THE INFINITE BARD, Thrilling Adventures. Somedays, you’re in the right place at the right time, and some days you’re not.  The verdict remains out on a recent day I wandered into the Teragons’ […]