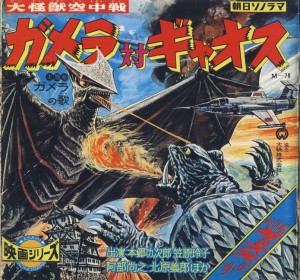 Hey, Pacific Rim fans and all you Giant Monster Kids — Now that you’ve had your fill of big screen big monster action this summer, why not take a step back in time and, through the miracle of digital media, take a look at some of the films that inspired Del Toro’s flick.

Since I’ve been working on my free giant monster serial, Daikaiju Attack, I’ve been watching even more of the classic giant monster films than usual.  So, if you missed any of these gems, now is a great time to catch up.

5) GAMERA VS. GYAOS (a.k.a. Return of the Giant Monsters) – Probably the best of the original Gamera series, this flick pits the fire-breathing flying turtle against his most (literally) blood-thirsty nemesis.  Gyaos, a laser-beam screaming cross between a pteranodon and a bat, is Gamera’s most popular foe, and has appeared in both original and modern era films.  This is where it started, though, so check it out. 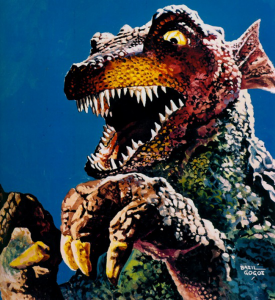 4) GORGO – This film from England was so popular that Gorgo, the title character, actually had a comic book series for a while.  (You can read the issues online for free.)  Gorgo also features one of the all-time great giant monster suits and some really solid special effects work.  Additionally, he was featured on one of the greatest Famous Monsters of Filmland covers of all time, painted by Basil Gogos.  (pictured)

3) MOTHRA VS. GODZILLA (a.k.a. Godzilla vs. the Thing) – Nobody in the US knew who Mothra was (well, not nobody, but certainly nobody in film distribution), so this classic film got retitled to Godzilla vs. the Thing, because a giant moth looks so much like a killer vegetable from another planet.  Yep.  Despite that, this film is in the opinion of many kaiju fans (including me) the best of the Godzilla films to follow up the original.  It’s a classic blend of fantasy, human drama, and giant monsters.  And the dubbing was done by Titra/Titan, the people who dubbed Speed Racer and many other Japanese classics brought to the US; so even the dub is good.  Great special effects, direction, and score put this one at the top of the Godzilla heap.

2) THE BEAST FROM 20,000 FATHOMS – The father of all the later crop of giant monster movies, Ray Harryhausen’s first solo film inspired Gojira (Godzilla) and propelled the special effects master to a decades-long career as the giant monster man.  All of Harryhausen’s films are worth catching, and many of them feature giant monsters, but the elements of this picture appear in so many other films (atomic release of monster, hero whom no one will believe, successive wave of destruction leading to monster in the city) that it’s a must-see for anyone serious about giant monsters.

1) KING KONG (1933) – The gold standard against which all other special effects  films are judged.  This is the original giant monster flick (though dinosaurs appeared previously in The Lost World), and thus is the grandfather of all these others — especially since it inspired Ray Harryhausen to make Beast (after working on Mighty Joe Young).  There are so many classic scenes in this that it’s impossible to list them all.  If either the Skull Island or the New York parts of the film don’t touch you on some level, you have no soul.  This film was so far ahead of its time, that, aside from Joe Young, nothing like it was done again until Harryhausen came along.  The original Kong was, and remains, the greatest.

That’s it for this giant-monster go-round.  Thanks for your time.  While you’re at the computer, check out Daikaiju Attack.  It’s free online and new episodes are posted every weekend.  Happy reading — and watching!

People who know me, know that I’m a Monster Kid through and through.  I don’t remember a time when I didn’t love monsters. Thinking back, it certainly started with a love of dinosaurs and quickly […]

Busy June included a great trip to see friends, meet stars, and take in a few movies at Monster Bash, but only yielded 27 films total — one of my lower count.  Some family issues/drama […]

This is the sixteenth part of a serialized giant monster story published in weekly installments on this site. Tune in every week! Click here to read the first part.  Click here to see my new release Zombie Shark! […]