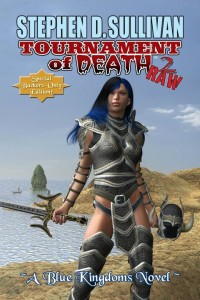 About Steve Sullivan 395 Articles
Stephen D. Sullivan is an award-winning author, artist, and editor. Since 1980, he has worked on a wide variety of properties, including well-known licenses and original work. Some of his best know projects include Dungeons & Dragons, Teenage Mutant Ninja Turtles, Dragonlance, Iron Man, Legend of the Five Rings, Speed Racer, the Tolkien RPG, Disney Afternoons, Star Wars, The Twilight Empire (Robinson's War), Uncanny Radio, Martian Knights, Tournament of Death, and The Blue Kingdoms (with his friend Jean Rabe).
Website

THE CHILDREN OF RAY HARRYHAUSEN

With deepest condolences (and love) to Diana, Vanessa, and the rest of Ray’s family and friends. We are the children of Ray Harryhausen. For some people, like me, or Phil Tippett, or Dennis Muren (or nearly […]